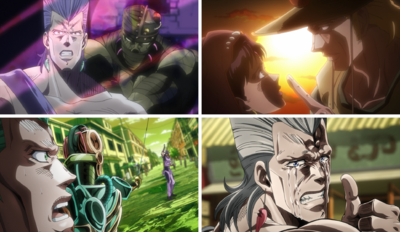 Emperor and Hanged Man, Part 1 (と その1, Enperā to Hangudo Man Sono 1)[1] is the tenth episode of Stardust Crusaders and the thirty-sixth episode of the JoJo's Bizarre Adventure anime. It covers Chapter 140 through Chapter 142 of the manga.

Commentary
“
Here's an episode I particularly appreciate. There's a real change of scenery when we arrive in India. Thus, it's naturally directed by Kato (laughs). He employed himself to portray this busy and full of life India.