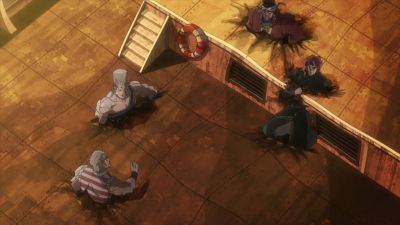 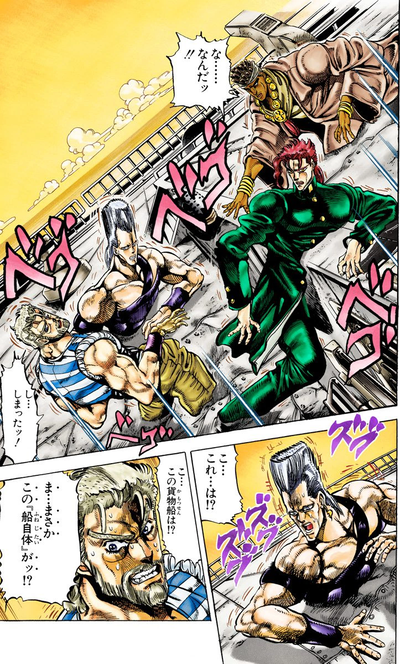 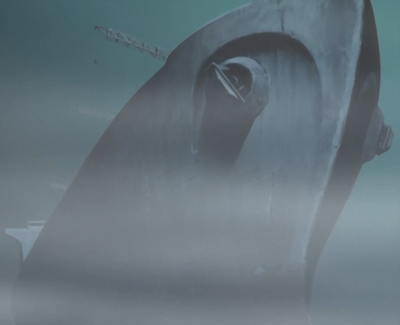 Strength (, Sutorengusu) is the sixth story arc in Stardust Crusaders.

It narrates the Joestar Group's encounter with a mysterious freighter in the middle of the sea.

DIO is seen in his mansion with an old woman named Enya and asks her what it means to survive. After a philosophical discussion, DIO concludes that conquering fear is the key to survival and standing atop the world. Enya questions what DIO has to fear to which he answers the Joestar family and the importance of not underestimating them. She states he need not deal with them himself as six Stand users are on their way to Singapore, including her son. DIO then questions what Enya truly wants and she replies that she only wishes to stay by his side and observe his life.

A freighter appears out of nowhere to seemingly rescue our heroes.

Back in the South China Sea it is revealed that the Imposter Captain Tennille placed explosives on the boat, requiring the group and the crew members to flee on life rafts. After some time passes on open water, Anne suddenly notices a large freighter near their rafts which lowers a set of stairs to rescue them. Jotaro notes it to be odd that there were no crew members present when the stairs were lowered but nevertheless, everyone boards the new ship.

No one is able to find any people onboard; however, Anne notices an orangutan (Forever) in a cage in one of the rooms. Joseph sees this as evidence that someone else must be on the boat in order to feed him and says they should look for that person. No sooner than saying this, Joseph sees a hook swaying behind Avdol that impales one of Captain Tennille's sailors in the head and hoists him up.[1] 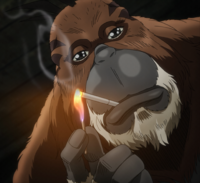 Forever displaying his strange behavior by smoking a cigarette.

Although the other members from Tennille's crew are shocked and confused, Jotaro's group immediately become suspicious of a potential Stand attack. Kakyoin sends Hierophant Green to look through the ship for the enemy while Joseph warns the crew to stay away from any machines and reassures Anne. As the group leave to look around the ship themselves, Anne's attention is caught by Forever pointing towards the lock on his cage. When she approaches and talks to him, she quickly realizes him to be no ordinary ape as demonstrated when he starts smoking and looking through a men's entertainment magazine. Tennille's crew warn her to stay away from him due to the strength orangutans possess so Anne leaves for the lower levels with them. Meanwhile, Hierophant Green is unable to find anything strange within the ship.

Down below, as the crew gather around a radio, Anne goes to take a shower; however, Forever is revealed to have left his cage and murders the crew members before approaching Anne and attempting to rape her. Luckily, Jotaro appears and hits the ape over the head with the lock to his cage thus saving her. He suspects Forever to be the Stand user which is confirmed after he somehow manipulates a fan to strike Jotaro in the shoulder.[2]

Forever phasing into the wall of the ship to avoid an attack.

Despite the obvious presence of a Stand attack, Jotaro comments that he is still unable to see the enemy Stand. He is suddenly flung backwards due to the fan's continued attack and witnesses glass break on its own off a window. Star Platinum is able to catch all the pieces of glass in between its fingers and goes to punch the orangutan; however, he phases into the wall of the ship, consequently avoiding the attack. Jotaro and the others (who begin to sink into the ship on the upper deck) finally realize that the freighter they are on is the Stand.

Jotaro and Star Platinum become restrained by the ship as Forever reappears, now dressed in a captain's attire, and draws Jotaro's attention to a dictionary detailing the meaning of his Stand's tarot card name, Strength. Jotaro manages to pull a button off his collar and flicks it on the back of Forever's head whilst also taunting him which angers the orangutan. As he rushes in to attack Jotaro, Star Platinum uses Star Finger to flick the button, now in Forever's hand, into the center of his head which sends him flying back. Jotaro is then able to escape Strength's bind on him and approaches the ape who exposes his belly to surrender. Jotaro refuses to accept this seeing as Forever has caused far more harm than any ordinary animal ever could and proceeds to pummel him with Star Platinum.[3]