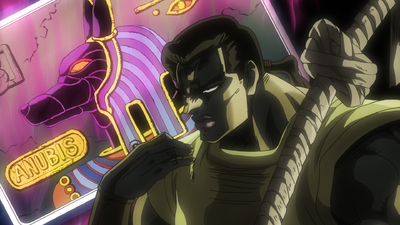 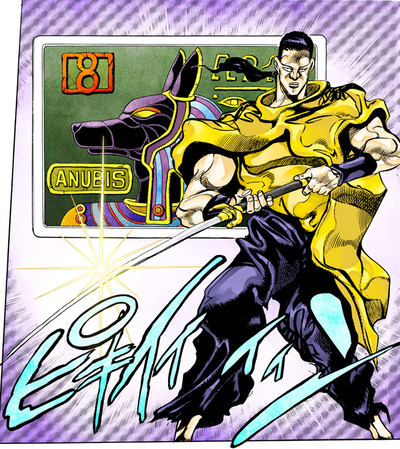 It narrates the arduous battle between Polnareff, Jotaro, and the sentient sword Stand Anubis.

While Jotaro and his group go up the Nile, Chaka stumbles upon the sword Stand Anubis, which hypnotizes him when he unsheathes it and convinces him to kill the Joestar group. Chaka first confronts Polnareff, who defeats him by shooting Silver Chariot's sword out. Polnareff subsequently takes the blade with him. Later Polnareff goes to a barber with the sword and Jotaro. When Jotaro falls asleep, the barber Khan is hypnotized and fights Polnareff with Anubis. However, Khan is stronger than before and has learned his techniques, putting Polnareff in a weak position. Jotaro intervenes and defeats Khan, but Polnareff is hypnotized too and combines Silver Chariot and Anubis to beat Star Platinum. Jotaro is stabbed in the stomach, but Star Platinum shatters the blade of Anubis. When Jotaro and Polnareff are distracted, the biggest shard hypnotizes a child, who throws the blade toward Jotaro in hopes of killing him. Fortunately, Iggy unknowingly makes the child trip and the shard finishes at the bottom of the Nile. Anubis is then defeated.[1]