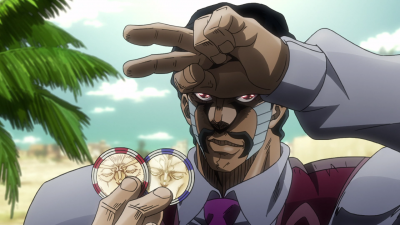 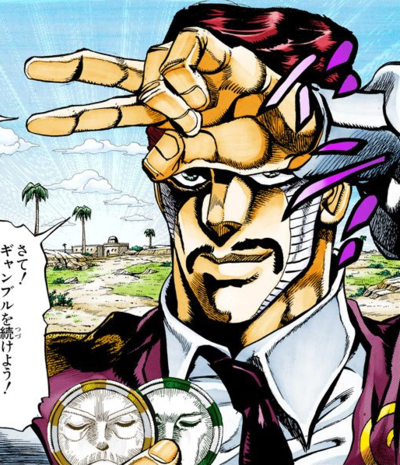 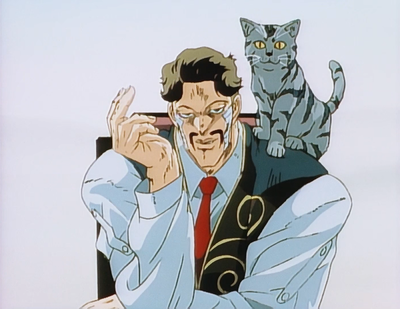 It narrates the Joestar Group's predicament as they get cornered in several gambles against Daniel J. D'Arby, who can steal souls.

On the outskirts of Cairo, Joseph is unsuccessful at having people recognize a photo of DIO's mansion until one man says that he does recognize it. That man demands that they bet on something and Polnareff complies. However, he loses the bet and gets his soul stolen from him.[1] The gambler reveals himself as Daniel J. D'Arby, the user of Osiris who can steal the soul of anyone who recognizes defeat in any form. D'Arby then tells the group that the only way to get Polnareff's soul back is to win it. Joseph then challenges D'Arby in a game where they put coins in a nearly full glass of liquor and whoever makes the glass spill loses. Joseph tries to cheat but D'Arby is a better cheater and wins Joseph's soul. Jotaro then challenges D'Arby at his best game: poker.[2] 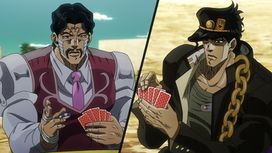 D'arby the Gambler vs Jotaro

Jotaro first disables D'Arby's hand because he saw him cheating during the deal, and calls a random child to serve as a dealer. Unbeknownst to Jotaro and Avdol, everyone in their place is on D'Arby's payroll, and D'Arby wins the first hand. During the second hand, Jotaro doesn't look at his cards, which fazes D'Arby a little. Jotaro then repeatedly makes objects appears in his hands and quietly raises the stacks to ridiculous amounts, accepting to bet the souls of everyone. D'Arby suspects that Jotaro has cheated somehow, having a perfect hand and that being the reason why he acts so confident. When Jotaro bets the soul of his mother in exchange for information on DIO's Stand, D'Arby becomes mad from the pressure, believing that he has no way to win. This makes him lose all hope, causing his stand to release the souls of everyone he had trapped before. However, he is too unstable to answer any question, defeated. In the end, Jotaro's hand is revealed to be a terrible one. He admits to having been playing only with the gambler's mind, not even knowing which cards he had on his hand, but having faith that his extreme confidence would make the gambler feel uneasy.[3]