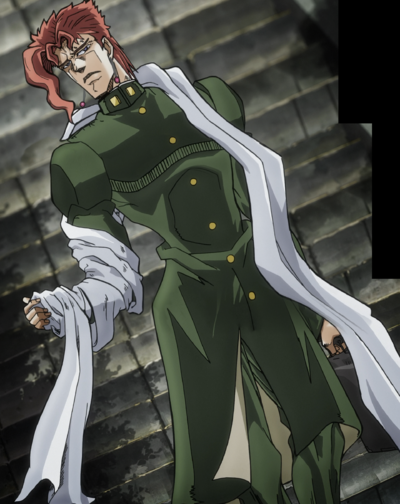 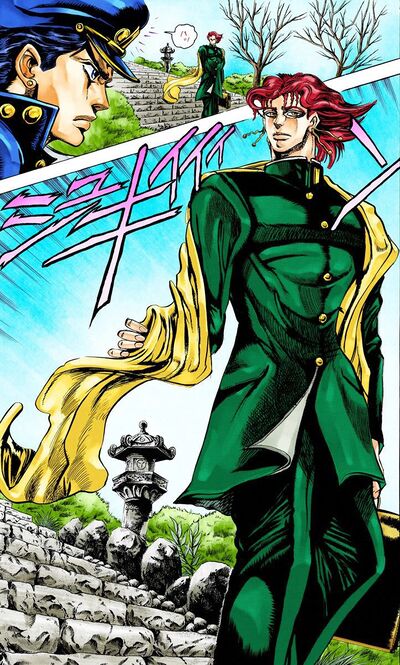 It narrates the fight between Jotaro and Noriaki Kakyoin, a Japanese student sent to assassinate him.

DIO, hiding in an unknown place, thinks about how he survived at the bottom of the ocean and plans to kill the descendants of Jonathan Joestar.

Meanwhile, Jotaro recovers from his fall and notices that his left knee is cut. He meets Noriaki Kakyoin, who gives him a tissue to clean the bleeding, but Jotaro is suspicious of the boy. When Jotaro gets his wound examined in the school's infirmary, he notices the tissue had a note from Kakyoin saying "Jotaro Kujo, I will kill you today with my stand!".

Suddenly, the nurse goes berserk and stabs the eye of one student with a fountain pen. She then tries to stab Jotaro who realizes that her strength is unnatural. Kakyoin reveals himself as one of DIO's minions, and that his Stand Hierophant Green can possess people. Jotaro's Stand manages to pull Hierophant Green out of the nurse's mouth and a proper fight begins.[1] Jotaro's Stand overpowers Hierophant Green and Kakyoin is taken down with severe wounds. Jotaro then decides to bring him back to his house.[2]

Avdol examines Kakyoin and discovers that he is controlled by one of DIO's flesh buds. Avdol also narrates his fateful encounter with DIO in Egypt four months ago and how he felt like DIO's words calmed his heart, but fled since he was warned about DIO by Joseph earlier. Using his Stand, Jotaro successfully extracts the flesh bud which Joseph destroys with the Ripple, thus saving Kakyoin.[3]

Avdol gives the name "Star Platinum" to Jotaro's Stand, according to the tarot card he pulled, the Star.[4]