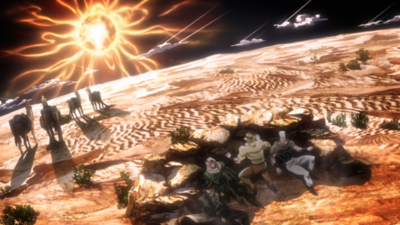 Sun (, San) is the fourteenth story arc in Stardust Crusaders.

It narrates the misadventures of the Joestar Group in the Arabian Desert, which they try to cross on camels and where they discover that the sun is an enemy Stand.

The Joestar Party arrive in Abu Dhabi, and rent camels to travel 100 kilometers northwest. Kakyoin believes they are being followed, but is unable to see anything. The heat begins to rise, even though the sun should have set at this point. Polnareff notices that the sun is rising from the west, leading the group to believe that the sun is actually an enemy Stand.[1] The group takes cover behind a rock and deduce that since Sun is so large, the Stand user must be close. Everyone but Joseph begins laughing, and he believes they are losing their grip because of the heat. Kakyoin reassures him that they are laughing because they notice two identical rocks close by. Jotaro uses Star Platinum to throw a stone at the second rock, creating a hole in open space. It is revealed that Sun's user, Arabia Fats, was hidden in a car behind a mirror that was following the Joestar group, confirming Kakyoin's suspicions.[2]