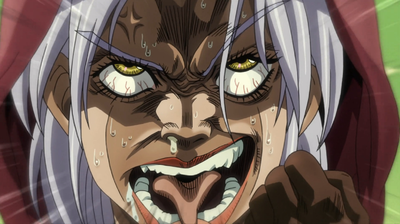 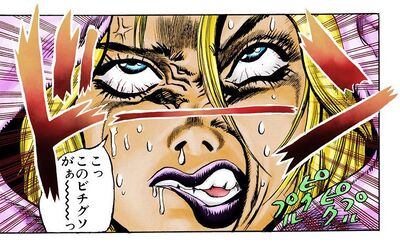 Near Luxor, Joseph is electrocuted by a strange electric socket, revealed to be Bastet, Mariah's Stand. Metallic objects begin to fly toward Joseph, which he only notices the day after, when the magnetization becomes so dangerous that knives and forks fly toward him. Joseph identifies Mariah as the enemy and he pursues her alongside Avdol. Unfortunately, Advol also touched Bastet, and is magnetized too. Momentarily stuck, they are almost crushed by a train and manage to detach themselves. Using Hermit Purple to divine their surroundings, Advol and Joseph manage to surround her, having collected many metallic objects along the way. They then rush toward each other and crush Mariah, who is defeated. Meanwhile Jotaro and Polnareff, who had been waiting for Joseph and Avdol, finally think to go look for them, and are stalked by Alessi.[1]