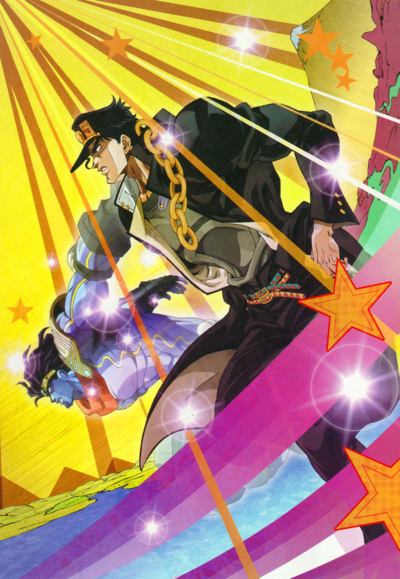 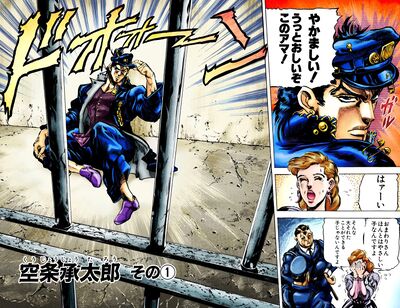 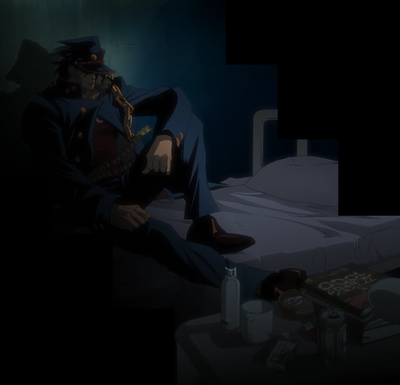 It introduces the grandson of Joseph, Jotaro, his meeting with the fortuneteller Muhammad Avdol, and Jotaro's discovery of the Stand power.

Fours years ago near the Canary Island, a trio of treasure hunters brings up a casket bearing the engraving name "DIO" around dusk. When the ship was found days later, only the empty coffin remained.[1][2]

Jotaro and his "evil spirit"

The story begins in 1988 with Holy Kujo, daughter of Joseph Joestar, visiting her son Jotaro after learning he is in jail for having beaten up four people. But Holy learns she was called by the police because Jotaro refuses to leave the cell due to being possessed by an "evil spirit" that has been sneaking in items while intimidating Jotaro's cellmates. He demonstrates this possession by having the "spirit" steal a gun from one of the officers and then shoots himself with the entity catching it. Only Holy can see the "spirit" as Jotaro restates his intent to stay in his cell for everyone's wellbeing.[1]

Sometime after being called by his daughter Holy to come to from New York to Japan, Joseph Joestar arrives and has a moment with his daughter before she takes him to the police station. There, believing he has an understanding of what he is dealing with, Joseph orders Jotaro to leave his cell so that they can go home, but Jotaro refuses to listen while his "spirit" tore off the pinky of his grandfather's prosthetic hand. Now certain of the identity of the "spirit", Joseph reveals the fortuneteller Muhammad Avdol who followed him and Holy. After Joseph gives Avdol permission to do what he must to force Jotaro out of his cell. Avdol summons Magician's Red, a being similar to the one Jotaro possesses and binds the teenager with fire.[2]

Joseph explains to Jotaro that the "evil spirit" is actually his Stand, a powerful representation of one's life force which stands beside its user. Jotaro floods his cell to dose the flames while having his Stand rip out two bars from the entrance of his cell with the intent to attack Avdol. But Avdol turns away as he managed to get Jotaro to step out of his cell. Joseph then explains that the mortal enemy of the Joestar bloodline, DIO, escaped from his coffin and is roaming free.[3]

Jotaro doesn't believe in Joseph's story. To give proof of his existence, the old man takes a camera and activates his Stand, Hermit Purple. His Stand takes the form of purple thorns around his hand, which he uses to break the camera. This produces a picture with a technique that Joseph calls Psychic Photography.

Avdol says that the Stand powers of the Joestar Family are linked to DIO, whereas Avdol was born with his powers. Despite all of this shown to him, Jotaro, nonetheless, hardly believes his grandfather’s information and evidence. Meanwhile, it is shown that DIO has become aware of this link as well, as he feels Jonathan's descendants watching him. He makes preparations to silence the Joestar lineage. On his way to school, Jotaro is followed around by a group of schoolgirls and is then attacked by a mysterious young man.[4]