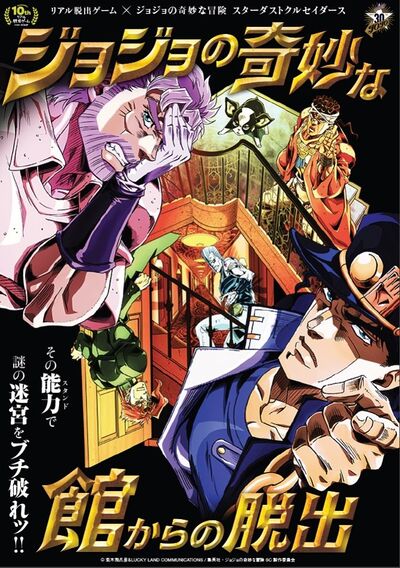 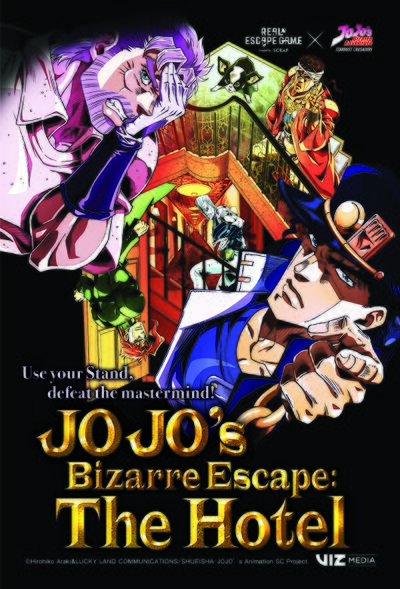 JoJo's Bizarre Escape: The Hotel, called Escape From JoJo's Bizarre Mansion (ジョジョの奇妙な館からの脱出, JoJo no Kimyō na Yakata kara no Dasshutsu) in Japan, is an escape room-styled attraction based on the story of Stardust Crusaders. The attraction is the second collaboration between Tokyo-based company SCRAP and the JoJo's Bizarre Adventure TV Anime Production Committee, following Escape From JoJo's Bizarre Amusement Park. Set inside a mysterious hotel, the "real escape game" requires participants to face an exclusive enemy Stand User and solve puzzles in order to escape his building-manipulating Stand.

VIZ Media also premiered the attraction in the United States at the 2018 FanimeCon in San Jose, California, from May 25 to May 28, and at the 2018 Anime Expo in Los Angeles from July 5 to July 8.

The story takes place during Stardust Crusaders as the Joestar Group make their way to Cairo, Egypt. After stopping at a hotel along the way called Hotel Haboob, Jotaro and the gang hear a mysterious voice belonging to Dija Maker telling them that they have one hour to live; those who cannot escape the hotel within an hour will disappear without a trace as a result of the power of his Stand House of Holy.

The group assumes this to be one of DIO's minions, but they are unable to locate him within the building. Suddenly, the walls of the room begin to wriggle and the hotel becomes a convoluted maze. Unable to damage the maze itself, the group has to figure out a way to find the enemy's true form and strike before it's too late.