As late members of La Squadra Esecuzioni, both Sorbet and Gelato were likely Stand Users, however their abilities were never revealed in the story.[2] According to JOJO A-GO!GO!, this is inferred through Pericolo's remarks in Chapter 469 and the diagram in Chapter 470.[3]
Natural Resources Worker's Stand 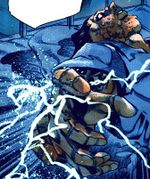 Manga Debut: Chapter 552: Pronto! On the Line, Part 2
Anime Debut: GW Episode 29: Destination: Rome! The Colosseum
One of the workers mentioned by Polnareff to Team Bucciarati gained a Stand after hurting himself on Meteorite stone in a volcano. During his coma, he made a spark with his right hand, burning a doctor's fingers. 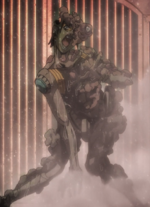 Manga Debut: SO Chapter 90: Whitesnake - The Pursuer, Part 2
Anime Debut: SO Episode 21: Awaken
During his fight with F.F., Enrico Pucci used an ability disc that boils the water from a water fountain to kill F.F. 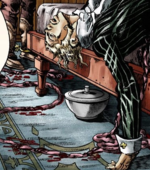 Manga Debut: SBR Chapter 13: The Sheriff's Request to Mountain Tim (Mentioned only)
When investigating the murders of three participants of the Steel Ball Run (having been exploded by the Boomboom Family's Tomb of the Boom 1 2 3), Mountain Tim recalled the story of an Emerald Prospector who, after entering Arizona's desert, developed an ability which killed in a similar fashion.
Alternate Johnny's Stand 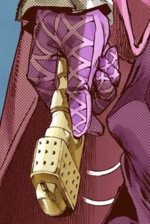 Manga Debut: SBR Chapter 88: Break My Heart, Break Your Heart, Part 1
A Stand belonging to an alternate universe version of Hot Pants. Its appearance and abilities are extremely similar to Cream Starter's. As part of a promise, Funny Valentine pulls the Stand out and hands it to Johnny, who uses it to heal Slow Dancer. 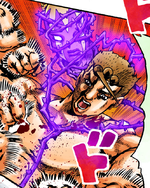 Manga Debut: JJL Chapter 110: Higashikata Fruit Parlor (Flashback)
A Stand belonging to Joseph Joestar. While having a vine-like body, it at least has a fully-formed head. The vines appear from his birthmark and wrap around his arms. It appears to have the ability to project vine-like tendrils, not unlike Hermit Purple albeit without the use of the Ripple. 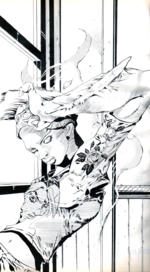 Spin-Off Debut: The Anatomy Lesson of Dr. Nicolaes Tulp
The Stand of Kaoru from the The Anatomy Lesson of Dr. Nicolaes Tulp. Its name is unknown, but has the ability to spawn items under Kaoru's skin. In one instance, Kaoru cuts open his skin and gold coins from another country fall out. When used, an aura in the shape of a horned demon appears around Kaoru.
Gucci Bag Stand

Spin-Off Debut: Kishibe Rohan Meets Gucci
The Stand of an Genius Artisan from the Gucci brand, who bound it to a Gucci bag. It is mentioned that three bags with the same ability were made by the artisan, making it possible his Stand can grant its ability to an unlimited number of bags. Anyone can use the bags, even if they are not Stand users themselves. It has the ability to vanish valuable things that the owner keeps in the bag. When the owner of the bag is in trouble, the bag will return the vanished objects in some way (the objects do not appear in the bag, but the owner will recover them in an unexpected event).

The series is known for alternating colors between media, the information presented below may or may not be canon.
Bag
(Brown, green, and red leather with silver buckles and zippers, brown strap, golden casing.)