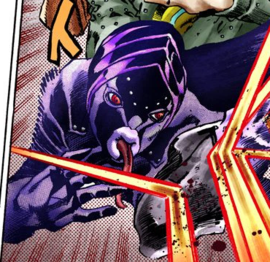 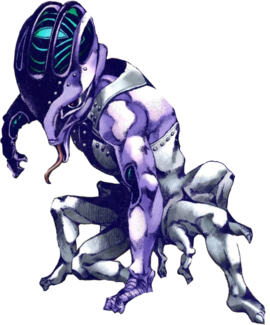 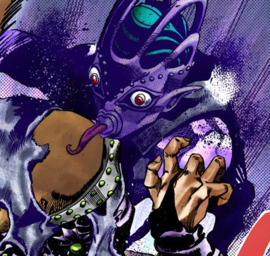 Destructive Power
D
Speed
C
Range
C
Persistence
B
Precision
C
Developmental Potential
C
A
B
C
D
E
A: Very Good
B: Good
C: Average
D: Poor
E: Very Poor
“
After we went looking for a mine inside that cursed mountain that the local Indians avoid, we found these abilities! The Indians say they bring misfortune, but they brought us happiness!
”
—Benjamin Boomboom, SBR Chapter 17

Tomb of the Boom is a fairly small Stand with a vaguely humanoid upper body. Each version of the Stand has slight differences. All three versions possess an elongated face with a long tongue coming out of a small mouth, resembling a giant anteater

Each member of the family, Andre[2] like Benjamin[3] and L.A.,[4] turn people into magnets by touching them, including a few drops of blood.[5]

Once turned, every metal object near the victims will be attracted to them and will sink into their body, causing crippling wounds.[5] André can magnetize several people at once and the victims will also attract each other.[6] If the affected people get far enough from the Boomboom Family, the magnetism weakens,[3] but if they sufficiently approach a victim, the magnetism is so powerful that the victims' bodies will rip themselves apart.[7] The magnetism also becomes more lethal depending on the number of affected people in close proximity of each other.[6]

Tomb of the Boom 1 (トゥーム・オブ・ザ・ブーム ワン, Tūmu Obu Za Būmu Wan): Benjamin Boomboom can let metal objects sink into his skin to replicate the appearance of another person or spawn metal blades from his body to attack by surprise.[3]

His Stand is strong enough to deflect bullets from a revolver.[6]

Tomb of the Boom 2 (トゥーム・オブ・ザ・ブーム ツー, Tūmu Obu Za Būmu Tsū): Andre Boomboom is the most powerful of the three, according to Benjamin.[6] However, it isn't seen doing anything in particular.

Tomb of the Boom 3 (トゥーム・オブ・ザ・ブーム スリー, Tūmu Obu Za Būmu Surī): L.A. Boomboom manipulates iron sand.[4] With the sand, L.A. immobilizes his victims by binding their limbs.[4] Additionally, he is able to kill a person by manipulating the iron particles in their blood to suck out their blood. Tomb of the Boom itself takes form from the iron sand.