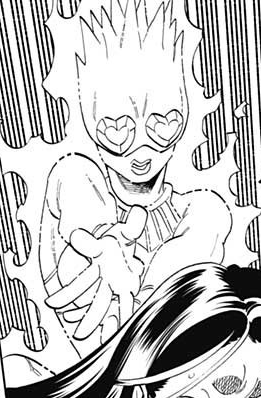 Fujiko's Bizarre Worldly Wisdom -Whitesnake's Miscalculation-
“
It's said that Buddha overcame his afflictions and attained enlightenment by sitting under the Bodhi tree… Could this Stand have given Jolyne that same kind of "spiritual power"…?
”
—Enrico Pucci about Bad Romance

Granted to Fujiko by Whitesnake via a Stand DISC, Bad Romance allows Fujiko to control the mental state of anyone who receives one of her drawings.

Bad Romance is a Natural Humanoid Stand with a feminine and svelte silhouette. It has an organic looking body with a light color.

It notably wears a helmet that covers its whole head except the bottom of the face, leaving the mouth, lips and chin exposed. The helmet is decorated with large lenses that look like heart-shaped crystals, and its top is decorated with a multitude of upward-facing spikes, reminiscent of one of the costumes from the "Bath Haus" segment of the "Bad Romance" music video. Bad Romance also wears a form-fitting top which has several straps connecting it to a collar. 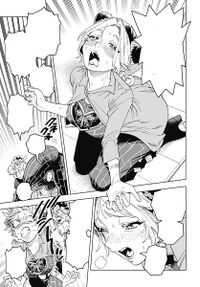 Bad Romance's power, as Whitesnake puts it, allows Fujiko Fujiyama to control the mental state of those who receive a drawing from Fujiko.

The trigger for Bad Romance's power is the act of giving a drawing to the victim. Then, wherever the victim or Fujiko are, Fujiko can influence her victim with her drawings. 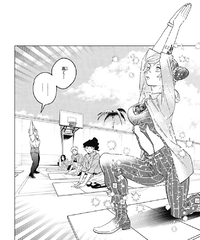 As a shunga artist who draws and sells erotica, Fujiko uses her Stand to enhance the effect of her drawings by increasing her customers' libido, as it is said that she has less customers after she loses Bad Romance. When Fujiko affects Jolyne, the latter begins to feel a great amount of sexual desire out of the blue and without any stimulus. Jolyne's libido increases as Fujiko draws, to the point where she feels pleasure out of painful experiences like being hit with a baton or stabbing her thigh with a pen.

When Fujiko's desire for Jolyne turns into adulation and she draws Jolyne in the form of "religious drawings", Jolyne reaches a state of enlightenment, illustrated by her ability to perfectly strike yoga poses and her feeling refreshed. Enrico Pucci comes to worry about this effect, fearing that it might grant "spiritual strength" to Jolyne.[1]