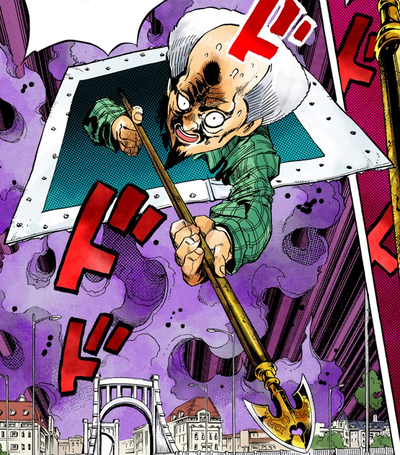 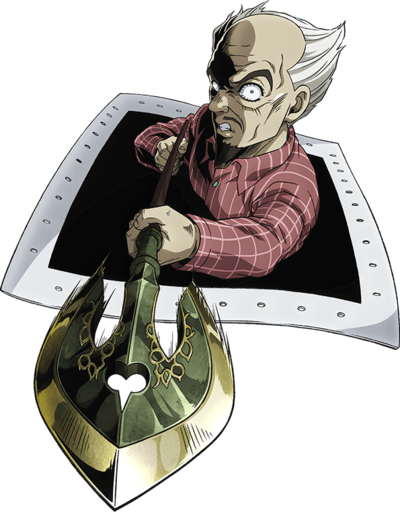 It allows Yoshihiro to remain and move inside of a photo, potentially trapping other people with him inside of it. 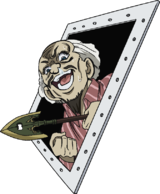 Atom Heart Father is an ability bound to a dark Polaroid camera and the pictures it produces,[3] thus it doesn't have an appearance. Yoshihiro uses its ability often to hide inside the pictures and sometimes visibly stick out. Due to the encounter with the Morioh group, the picture Yoshihiro resides in is pricked with holes on its border.[4]

The abstruse power of Atom Heart Father makes it a fearsome and seemingly invincible Stand when it is set up. However, it has a glaring weakness in that anyone is free to use the camera the ability is bound to, allowing Jotaro to take advantage of it and render the Stand harmless.[5]

Atom Heart Father is bound to a Polaroid camera which takes pictures with several extraordinary properties.[3]

The most obvious one is that it allows people to see the ghost of Yoshihiro Kira who is normally invisible to human eyes.[3] More precisely, Yoshihiro only exists inside the pictures the camera takes and he alone can move inside them.[6] In case the picture is a close-up, he can even extend his head and arms out of the photography to interact with the world.[4] If need be, the photograph can float around by itself and Yoshihiro can store items like the Arrow inside the photographs.[7]

Although this set of abilities makes Atom Heart Father seemingly impossible to stop, it has one glaring weakness. Anyone is free to use the camera the ability is bound to, and Jotaro uses that to take a photograph of Yoshihiro alone and then destroys the camera.[5] Thus, everything that is supposed to happen inside the old photograph is interrupted and Yoshihiro finds himself trapped within the small frame of a photograph, unable to use his power again.

Despite the destruction of the camera, the supernatural photograph can persist indefinitely.[7] However, if the photograph containing Yoshihiro is destroyed, his ghost will disappear forever.[8]

The Stand's basis is rooted in superstitions of photography capable of capturing the forms and images of ghosts, and an old Japanese superstition from the Meiji Era, where it was believed that cameras stole the souls of those who were taken a photo of. Araki came to the idea when thinking of how having a haunted photograph as a Stand would be interesting.[2]