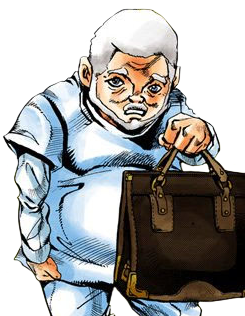 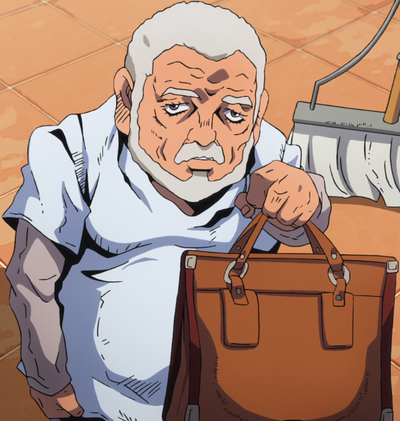 GioGio's Bizarre Adventure (NPC)
“
I pray for your safety. I owe the boss for the fruitful and fulfilling life I've led.
”
—Pericolo, Chapter 507: Head to Venice!

Pericolo is a Capo in Passione. He first appears to retrieve Polpo's ¥600,000,000 from Bucciarati and grants him the rank of capo. Immediately after, he gives Bucciarati Polpo's mission to bodyguard Trish Una, the Boss's daughter. Unlike many of his co-mobsters, Pericolo is an ordinary human that does not possess a Stand.

He is introduced disguised as a janitor but dons a suit for his later operations.

Pericolo is next shown through Moody Blues replaying his presence within Coco Jumbo's room. After relaying the message of a CD being hidden in a statue, he burns the photograph of the area the disk is in and shoots himself in the head to prevent himself from being caught and interrogated by the enemy. Unfortunately, the members of La Squadra Esecuzioni piece together the photograph anyway and chase Bucciarati's group to their next location.