I Am a Rock is an artificial humanoid Stand which is about as tall as Yotsuyu. Its face has segmented eyes with visible muscles around it, a horizontal line underneath each eye, no nose, and a frowning mouth. It has a bald head covered in spikes all around the top and sides. Behind its head, it has a capsule-shaped hood-like helmet which is also covered in spikes. Its neck has a high collar with a circular emblem attached in the middle, having a single spike in the center. 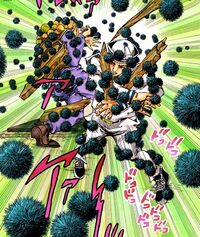 I Am a Rock making nuts converging on Josuke