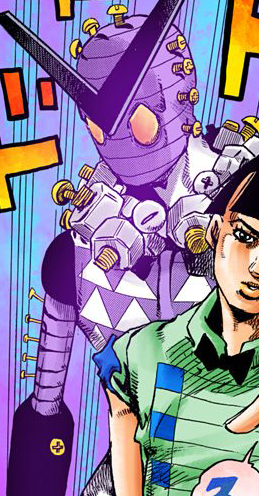 Nut King Call (ナット・キング・コール, Natto Kingu Kōru) is the Stand of Joshu Higashikata, featured in the eighth part of JoJo's Bizarre Adventure, JoJolion. It is a humanoid Stand with a nuts and bolts theme. Its power is to conjure nuts and bolts on objects or people, disassembling and assembling them as if they were mere pieces of a machine.

Nut King Call is a humanoid close-range stand with the ability to manipulate planted nuts and bolts in a target. It's shown being capable of pummeling opponents, such as Joshu attempting to stop Toru from reaching Yasuho Hirose on the day of the harvest.[1] 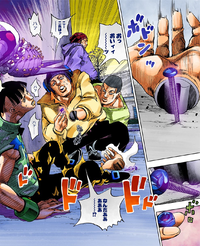 By planting nuts and bolts in a target, Nut King Call creates functional artificial joints. When a nut is removed from a bolt, which may be done almost instantly, the object breaks up and is disassembled. When applied to humans, the process of dismantling body parts appears painless.[2] These separations seem to undo themselves when a target is out of range, as seen when a thug accosting Joshu finds his hands reattached (albeit incorrectly) when Joshu flees.[3]

Nut King Call may also fasten together whatever objects are between a nut and a connecting bolt. This is first demonstrated when Joshu dispatches of a bar owner and his men by forcibly affixing parts of their bodies together and escaping as they stumbled around.[4] Later, he does the same to a bottle that Zaihei Nigatake was drinking from and the cursed money generated from Milagro Man.[5]

Nut King Call can even detach its own user's body parts, such as a tongue. When this happens, it is shown that Joshu still has control and feeling over the detached body part.[6]