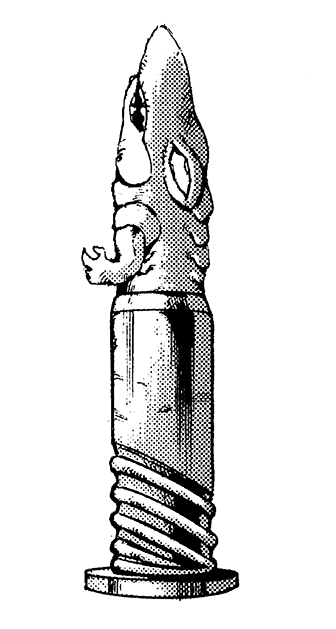 Public Image Limited (パブリック・イメージ・リミテッド, Paburikku Imēji Rimiteddo) is the Stand of Rigatoni featured in GioGio's Bizarre Adventure II: Golden Heart, Golden Ring. Bound to sniper rifle bullet, it absorbs the energy of Rigatoni but greatly enhances the power of the his shots to supernatural levels.

This Stand has no physical manifestation. However, when imbued with the stand's power, Rigatoni's bullets take on an augmented appearance. These characteristics include becoming approximately 10 cm (3.9 in) in length, turning blue, growing arms, and developing a sharklike face.

Rigatoni is capable of incrementally unloading the entirety of his 'Stand Power' into a bullet fired from his rifle. The Stand enhances the speed, power and precision of each shot, allowing the bullets to fly four times faster than normal and pierce through any obstacle between Rigatoni and his target. However, because the Stand rapidly drains Rigatoni's power, he is at risk of dying every time he fires.

To offset the Stand's major drawback, each augmented shot is capable of absorbing the Stand energy from a successfully hit target, equal to the amount of energy Rigatoni charges into the bullet.[1] As such, Rigatoni will typically only target Stand users.