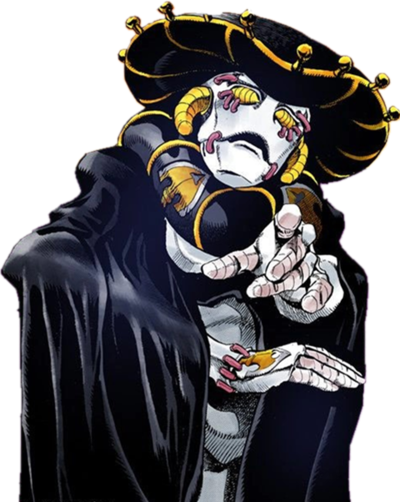 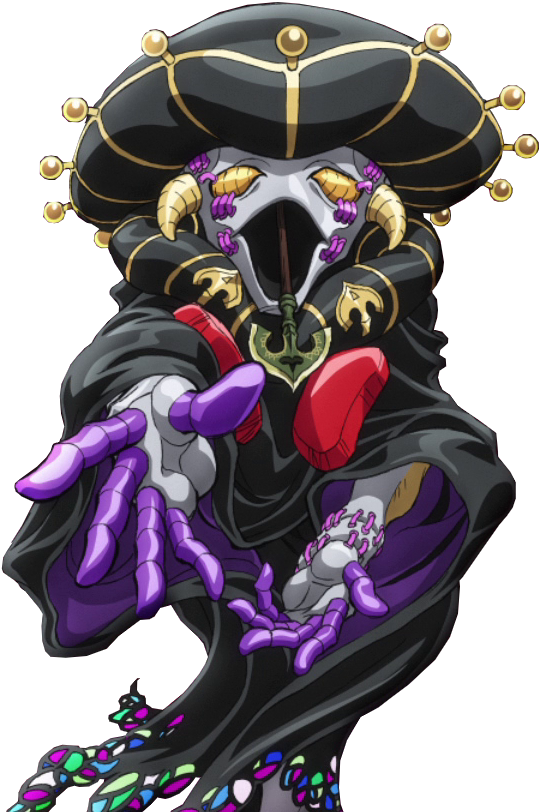 Destructive Power
E*
Speed
A
Range
A
Stamina
A
Precision
E
Developmental Potential
E
A
B
C
D
E
※(Power: A - When grabbing someone)
A: Very Good
B: Good
C: Average
D: Poor
E: Very Poor
“
There are two paths that you can follow. The first path is for the chosen ones who will live... and the other! The path of death!
”
—Black Sabbath, Chapter 451: Joining the Gang, Part 2

Black Sabbath (ブラック・サバス, Burakku Sabasu) is the Stand of Polpo, featured in the fifth part of the JoJo's Bizarre Adventure series, Vento Aureo.

Only able to exist within shadows, it has the ability to pull an individual's soul from their body and pierce it with the Stand Arrow contained within its mouth.

Black Sabbath appears as a large humanoid with a Venetian carnival mask-styled head, bound in a dark laced cloak and Venetian hat. Its body is riddled with small cables giving the impression of stitches. It also bears an Arrow motif on its hands and collar.

It is designed after a Venetian costume, notably inspired by the work of Casanova and by the image of Death. The borders of its hat and the scarf are used to evoke the image of Medieval Italy.[2]

Black Sabbath is an automated Stand that blindly follows the instruction given to it and thus doesn't have a personality.

It nonetheless talks to its victim, grandiosely announcing their impending trial by explaining that they can either "follow the path of the chosen or that of death"[3] when pierced by the Arrow.

Black Sabbath is an automated Stand that follows simple and direct preset commands. As such, it is characterized by its long-range strength, lack of damage transfer (to an extent that Polpo was unaware that Giorno Giovanna beat Black Sabbath[5]), and straightforward way of attacking. A formidable adversary in the shadows, it is nonetheless vulnerable to sunlight. However, even if beaten, Black Sabbath can be summoned back.[6]

For undisclosed reasons, Black Sabbath is linked to Polpo's test and his lighter. When someone holding the lighter puts it out but then reignites it, Black Sabbath materializes within the shadows and attacks all witnesses. It then automatically seeks to impale the souls of those present with the Arrow in its mouth to awaken a possible Stand, even if they already have one.[3] Polpo uses this Stand to weed out the recruits and only keep those with a Stand.[5]

Polpo is seen chewing off his fingers, and in the next panel seemingly grows them back. While this is never explained, Giorno suggests that it may be part of Polpo's Stand ability.

Black Sabbath can move at incredible speeds, but only within shadows

Black Sabbath's main ability is to draw power from the shadows.[7] The Stand is incredibly powerful within the shadows; its prowess can increase at least to the point where it can overpower and outspeed Gold Experience.[8]

Moreover, Black Sabbath can hide within shadows. It can sink inside a shadow as if it were water and go from one point to another near instantaneously as long as the shadows are linked, allowing it to easily re-position itself in the midst of battle.[7] It can even hide in small shadows and use them as transportation, using a bird's shadow to cross a sunlit space and hide inside an isolated tree's shadow.[6][8]

The drawback of this ability is that Black Sabbath is vulnerable to light. Being even partially exposed to sunlight pains it considerably,[7] thus its movements are restricted to the shadows. To escape, the Stand must touch a shadow again and hide inside.[8] In the sunlight, it is vulnerable and Gold Experience was able to destroy it with a barrage of punches.[6]

Black Sabbath can store objects inside its mouth, and Polpo uses that to hide an Arrow inside.[3] The Stand can then pull it out when needed, and continuously pierce people with the Arrow to awaken a Stand with little care about whether they have a Stand or not already. When Polpo unwittingly shoots himself in the mouth, he also destroys the Arrow inside Black Sabbath's mouth.[5] 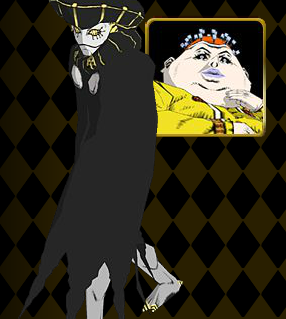 File:Giogio09.png
Black Sabbath makes its first video game appearance in GioGio's Bizarre Adventure, as a non-playable enemy character in Chapter 2-1. The player has two minutes to defeat Sabbath: if they fail to do so, the sun will set over the stage, and Sabbath will fatally stab the player character with its Stand Arrow. All of Black Sabbath's moves serve as means to grab the player character or their Stand. If the player is in the shadow, Sabbath can simply lunge at them; if the player is in the sunlight, the Stand must rely on moving crows to reach them. If Sabbath succeeds, it will stab the player's Stand with the Stand Arrow; the player will begin taking damage and must use the control stick and buttons on the controller to break loose.
Black Sabbath
Commands
Normal Mode

You! You reignited it!

You! Did you reignite it?
Non-Playable Character