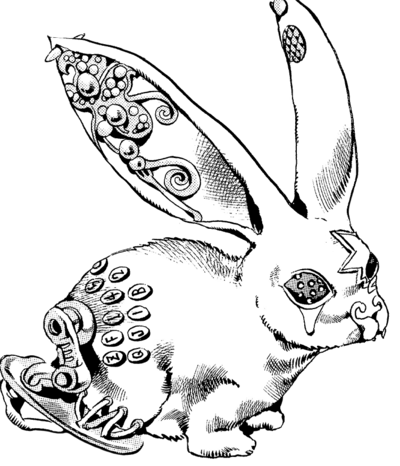 The Cure (ザ・キュアー, Za Kyuā) is a Novel-Only Stand featured in GioGio's Bizarre Adventure II: Golden Heart, Golden Ring. Its user is Coniglio. It is a small rabbit-like Stand that cures people and absorbs their ailments and suffering.

The Cure is said to have a passing resemblance to a small white rabbit although its User Coniglio states that it is mostly a small ball of white fur possessing a pair of disproportionately large ears which it uses as feeler. Illustrations of it make it resemble a rabbit nonetheless. Its right eye is red, while the left eye is gold and slightly smaller. There is a blue gem in the middle of the forehead and other similar gems at the tip of the ears and the back of its paws, giving it a bejeweled overall appearance.

The Cure's size automatically changes with the amount of pain and illness it absorbs. The greater amount it absorbs, the bigger it grows. Under normal circumstances The Cure can fit in the palm but when overcharged by the onslaught caused by Purple Haze, grows up to 20 meters in height.

The Cure can heal and absorb any living organism's wounds, illnesses and emotional distress. The absorbed pain accumulates within the Stand, causing it to grow accordingly, but will normally diverge over time. Should the absorbed pain exceed the allowed amount, the Stand will grow to extremely large proportions, and go berserk. In this runaway state, it gains a subhuman appearance, and continues to grow stronger the more it is damaged. 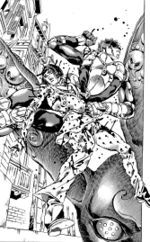 As part of Sogliola's plan, The Cure grows massive and loses control after absorbing a large amount of Purple Haze's virus in a short amount of time. In its runaway state, it begins destroying the city while scattering high concentrations of the virus stored in its body. It only grows stronger after Sticky Fingers and Gold Experience attack it, but eventually calms down after Coniglio calls out to it. After Sogliola's defeat, Coniglio settles into a village in Illinois where she uses The Cure to heal others in need.