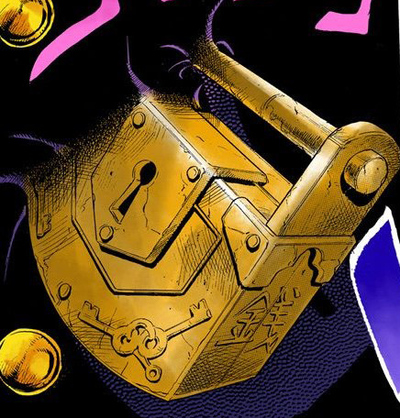 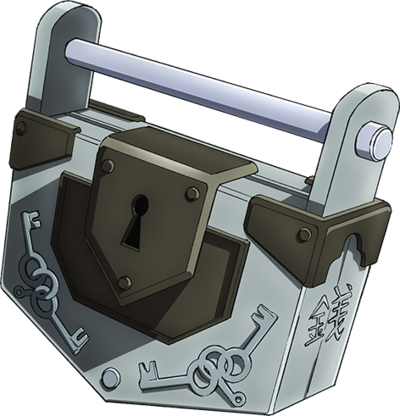 Destructive Power
E
Speed
E
Range
A
Stamina
A
Precision
E
Developmental Potential
E
A
B
C
D
E
A: Very Good
B: Good
C: Average
D: Poor
E: Very Poor
“
The guiltier you feel, the bigger that lock gets... In other words, that lock is the "weight of your guilt".
”
—Tamami Kobayashi, Chapter 285

The Lock (, Za Rokku) is the Stand of Tamami Kobayashi, featured in the fourth part of the JoJo's Bizarre Adventure series, Diamond is Unbreakable.

It manifests as a large metal lock hooked to the chest of its victims, its ability being the amplification of their feelings of guilt.

The Lock takes on the appearance of a giant U-Shaped Lock with the character 銭 (Zeni, meaning "Money") engraved on the front. It hooks onto the target's heart, appearing fused into their chest. As with most Stands, only people with Stand powers can see it. Even those under its influence have no idea it is there, only feeling its effect.

Tamami can also hold The Lock as a tangible item, as shown when he is called by Rohan Kishibe to confirm that Josuke is cheating in their game of dice.[2]

The series is known for alternating colors between media, the information presented below may or may not be canon.
Lock(Gold)
Lock(Gray and brown)

The Lock is an automatic Stand that has no combat ability whatsoever, but perfectly fits Tamami's petty goals. Despite this, it is surprisingly dangerous, as it can push people to the point of committing suicide.

By making someone feel guilty, Tamami can summon The Lock, which appears bound to the victim's chest.[3]

Afterward, their guilt is multiplied continuously and can add up with other accusations, represented by The Lock growing bigger and heavier.[4] The Lock will stay indefinitely even if it is moved away from Tamami,[4] until the victim either feels so guilty they commit suicide,[5] Tamami willingly cancels The Lock, or the source of the guilt disappears, usually meaning that the person "absolved" themselves by compensating Tamami with money or they learn that there is nothing to be guilty about.[4]

The Lock activating on Koichi

Tamami can trick people into feeling guilty for perceived but false wrongdoings and even lock several people at the same time.[6] However, Koichi could likewise influence his mother into not feeling guilty anymore, cancelling The Lock's effect.[5]

Tamami also claims that if someone with The Lock on them attacks him, the damage will be reflected on the attacker, but this is never shown.[4]

The Lock is shown to be capable of detecting dishonesty in a person, as shown during Josuke's cee-lo game against Rohan.[7] Though this power isn't elaborated on in much detail, Tamami explains that The Lock will move if it senses honesty, and stays still if it senses dishonesty.