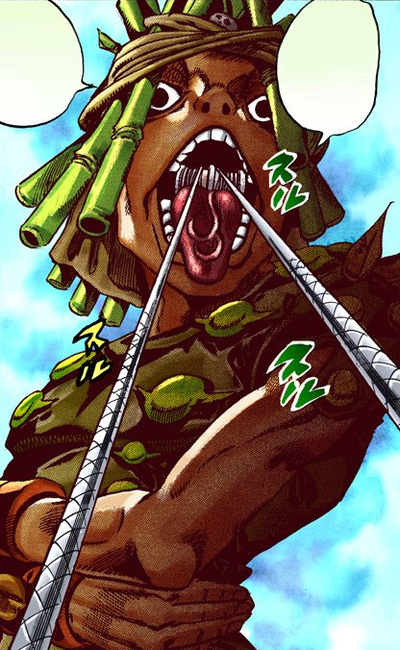 Destructive Power
D
Speed
B
Range
B
Stamina
B
Precision
D
Developmental Potential
D
A
B
C
D
E
A: Very Good
B: Good
C: Average
D: Poor
E: Very Poor
“
The hooks come out from where you touch! That's the job of the 'bait'! You can't do anything else!
”
—Pork Pie Hat Kid, SBR Chapter 27: Tusk, Part 3

It manifests as a pair of hooked cables that can travel to a different dimension to lure targets with artificial bait.

Wired takes the form of a winch and two hooked metallic cables inside the mouth of its user, Pork Pie Hat Kid. When the Stand is inactive, Wired's hooks rest on Pork Pie Hat Kid's tongue. It is possible to attach bait such as feathers or insects to the Stand, allowing the hook to emerge from the bait itself.[1]

The series is known for alternating colors between media, the information presented below may or may not be canon.
Hook and cables(Silver)

Wired's ability enables Pork Pie Hat Kid to ambush victims from far away and the hooks possess enough speed to act faster than the eye can see.[2] The winch winds up the wires with a lot of power, making it capable of fully tearing a snake apart. Wired's hooks are strong enough to lift a fully-grown man and even gently lift a horse.[1]

Pork Pie Hat Kid can "fish" by lowering Wired's hooks into a plate filled with water, which functions like a portal that sends the hooks to a different dimension in order to catch his prey. He can observe the different dimension as long as he's looking at the water from above.

Pork Pie Hat Kid can attach objects to the hooks, allowing the hooks to emerge from that object in the other dimension. For example, he can use a bird's feathers to make hooks appear on the underside of the feathers.[3] Any object can be sent through the portal regardless of their size, such as Johnny's horse.[1]

There are a few limitations to Wired. The water surface Pork Pie Hat Kid uses is small and only offers a limited view of his target. Thus, he can only see his target and attack them from above, and can also be fooled into making mistakes.[3] Moreover, anyone can use the objects as portals as well, which allowed Johnny to shoot through several feathers to hurt the user.[1]