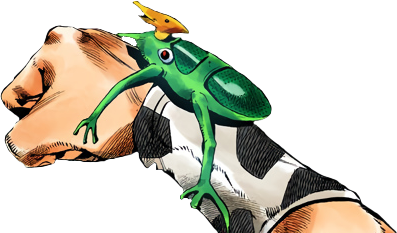 Destructive Power
∅
Speed
∅
Range
B*
Stamina
C
Precision
∅
Developmental Potential
∅
A
B
C
D
E
*(Range: Rikiel's visual range)
A: Very Good
B: Good
C: Average
D: Poor
E: Very Poor
“
It must be one of those 'rods'...! It's only been seen in video footage, and a live or dead specimen has never been found... It's because they melt immediately after they die... Is his ability to control these 'rods'?
”
—Emporio Alnino, SO Chapter 114: Sky High, Part 3

Sky High (スカイ・ハイ, Sukai Hai) is the Stand of Rikiel, featured in the sixth part of the JoJo's Bizarre Adventure series, Stone Ocean. Attached to the wrist of Rikiel, it allows him to control a colony of "rods", cryptids that can fly and suck the body heat of people.

Although it is never actually seen in the storyline, the page giving data on it and the rods depict the Stand as a small creature that sits on Rikiel's wrist. It takes the form of a four-legged creature with long three-toed feet, and a long main body. The main body has very few features, with its only distinct features being two reflective plates, eyes, and a proboscis-type mouth. Sky High also displays a second head, which protrudes out from the top of the first head. This second head is smaller, with a look similar to that of a pteranodon.

The series is known for alternating colors between media, the information presented below may or may not be canon.
Body(Lime and pine green body, gold horn.)
Eyes(Red)
Rods(Translucent baby blue.)

Sky High functions as a tool that allows Rikiel to control a hidden species of creatures known as Rods (, Rozzu).[1] While normally small and virtually invisible (except while being recorded), a large group of Rods under Rikiel's control can act as his own army of attack dogs

Rods primarily fly, utilizing four sets of wings to propel themselves forward.[2] Whenever they're flying, their wings rotate similar to propellers, and the direction in which they are flying depends on which direction their wings are rotating. Moreover, they are especially nimble and can slip through extremely tiny openings (such as a web made by Jolyne with Stone Free [3] or evade the punches of Stone Free itself.[4] Through Sky High, Rikiel discovered the rods' main source of sustenance: body heat.[5] By flying past other organisms, the rods can absorb the body heat as food and use it to fuel themselves. The rods can also find heat to absorb via heat-seeking organs located near their nose.

Sky High's only power is to control and direct the rods.[3] However, the exact mechanism of that control is not disclosed and is theorized as a trust relationship.[6] Prior to him learning about his Stand, Rikiel would even be harmed by the rods, with them sucking the heat from his body and causing various diseases.[2] This can still happen to Rikiel when he is in a stressful situation, with the Rods causing his eyes to flutter after being attacked by Jolyne and Ermes.

Rikiel is able to control all rods as long as they are in his line of sight, but the closer Rikiel is, the more accurately he can direct the rods,[3] However, they can still be controlled and effective at long ranges such as when he used the Rods to attack Jolyne, Ermes, and Emporio in a helicopter.[3] Rikiel needs to concentrate to properly control the rods, and their effects can even backfire on him if he loses his cool. If he panics, Sky High unwillingly orders all nearby rods to stay still.[2][5]

Rikiel exploits the rod's habit of sucking heat to rapidly and locally decrease the temperature of a selected body part from afar. When concentrated in one spot, the rapid decrease in heat can cause body parts and internal organs to become prone to disease and failure.[4] Depending on where this decrease in temperature is in the body, it can cause a wide variety of effects, such as 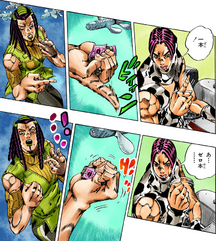