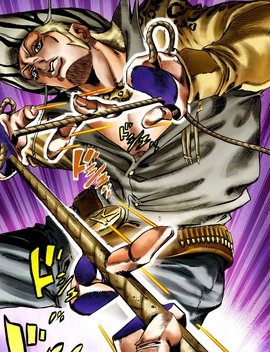 Oh! Lonesome Me (オー！ロンサム・ミー, Ō! Ronsamu Mī) is the Stand of Mountain Tim, featured in the seventh part of JoJo's Bizarre Adventure, Steel Ball Run. This is a pure ability Stand that allows Mountain Tim to safely transfer his body parts along a rope.

Oh! Lonesome Me manifests mainly in Mountain Tim's ability to separate and spread himself along a rope. Tim's interior is darkened and not anatomically articulate.

The series is known for alternating colors between media, the information presented below may or may not be canon.
Rope(Light brown)
Interior(Purple)

Oh! Lonesome Me functions as an ability that Mountain Tim personally uses. It gives him and others greater flexibility in combat but is overshadowed by more powerful Stand abilities. 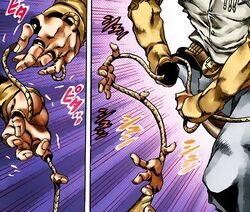 Mountain Tim transferring his fingers along the rope

Oh! Lonesome Me enables Mountain Tim to separate segments of his[1] or others' bodies[2] and freely slide them along a rope. It also grants him superhuman control over the rope, freely and precisely manipulating it to grab small objects from afar for instance.[3]

This ability to separate himself into little pieces as far as the rope goes grants Mountain Tim greater agility and flexibility. Launching himself along it, Tim may shoot enemies from odd angles;[2] and through the process of splitting and joining himself and others back together, he may travel and escape through small spaces.[2] By separating himself, Mountain Tim can also lessen the damage of a bomb blast.[4]

Oh! Lonesome Me also allowed Tim to absorb water through the ropes as a means to survive the dehydration during his first time in the "Devil's Palm".[5]

Araki stated that he made Oh! Lonesome Me based on the association of cowboys with lassos.[6]