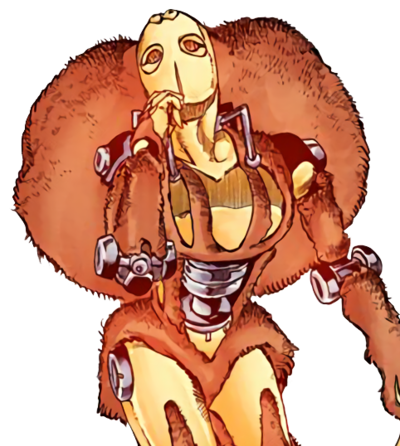 JJL Chapter 43 (Ability only)
JJL Chapter 44
“
I can only make his hair grow in places he touched himself. My range is only up to 80 meters, so even if I grow hair on their bald heads, once I move away from them... It all just falls out so they get mad and ask for their money back and stuff.
”
—Karera Sakunami, JJL Chapter 44: Love Love Deluxe, Part 2

Love Love Deluxe (ラブラブデラックス, Rabu Rabu Derakkusu) is the Stand of Karera Sakunami, featured in JoJolion. Love Love Deluxe is a humanoid Stand that makes hair grow wherever a designated target has touched.

Love Love Deluxe is a humanoid Stand. It has a feminine appearance, and has mechanical joins at the waist, hips, shoulders, elbow, and hands. A set of metallic cables also connects its chest to the neck. Love Love Deluxe is covered in patches of fur that cover its legs, arms, and body in a way reminiscing of a dress with arm gloves and tights. It also has a large almost afro-like head of hair with a braid going down the middle of it, resembling a zipper.

In the colored manga, Love Love Deluxe is orange and yellow with gray metallic joints.

The series is known for alternating colors between media, the information presented below may or may not be canon.
Body
(Yellow body, orange eyes, hair, and fur clothing, metal grey joints and feet.) 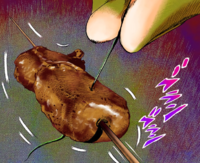 Hair growing out of a yakitori

With Love Love Deluxe, Karera Sakunami has control over other people's hair, but only within a 80-meter range of herself.[1] She generally uses Love Love Deluxe to scam people by making them think she can grow their hair back permanently, but has also used it to avoid paying for food by producing a yakitori-stand owner's hair in a product she bought[2] or using it to discover the PIN of someone whose ATM card she has stolen, as the hairs on the LCD screen grow at different lengths depending on the order of the numbers.[3]

In terms of offense, she's demonstrated being able to grow a long, rope-like strand of hair from a car's gas tank to a target and igniting it with a lighter.[4]