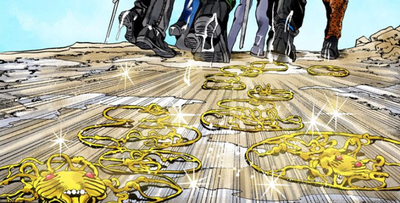 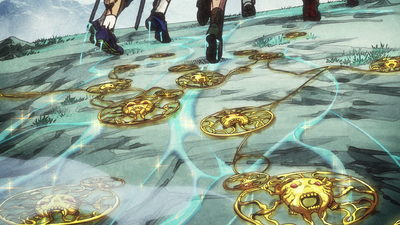 Survivor (サバイバー, Sabaibā) is the Stand granted to Guccio by Whitesnake, featured in the sixth part of the JoJo's Bizarre Adventure series, Stone Ocean.

It appears as a group of small Stands that travel through water and increase the aggressiveness of anyone affected by their minute electrical signal. Out of all the Stands DIO knew, this one is said to be the weakest. 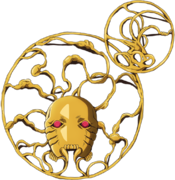 Survivor appears as a multitude of small round and flat creatures equipped with two eyes, a small mouth, and a multitude of tentacles sprouting from the main body which form a ring around it.

The series is known for alternating colors between media, the information presented below may or may not be canon.
Body(Yellow)
Eyes(Red)
Teeth(White)
Body(Dark yellow)
Eyes(Dark red)

Survivor is an automatic and thus uncontrollable Stand which, unlike most Stands, simply creates general chaos by manipulating people around it. It crawls along the ground like a jellyfish, and approaches its targets without being detected.[1] It doesn't have any real use besides causing mayhem somewhere in the hopes that its intended victims die.

Survivor dramatically exacerbates the aggressiveness of those under its spell.[2]

Described by DIO as the "weakest" Stand,[3] Survivor enables a small electrical current to travel across wet surfaces and stimulate the human limbic system. The current is generated by someone's anger, travels through the nervous system into the ground, and the electricity turns into Survivor itself.[4] Survivor can only affect people across wet grounds but when it does, it then transfers the current into the victims' nervous systems. The current has only a tiny electric potential of 0.07 Volts and is objectively negligible. However, it stimulates the limbic system to increase an individual's anger, competitiveness, and fighting spirit.[3]

Any feeling of aggressiveness will be greatly multiplied to the point those affected by Survivor will fight each other with reckless abandon. For instance, Sonny Likir, a prison guard, punched his comrade so hard he not only tore away part of Viviano Westwood's flesh, but also exposed his knuckles due to the severity of the punch.[2] Afterward, the victims may even actively seek confrontation regardless of the consequence, such as a prison guard releasing all the prisoners of the isolation ward to fight them.[5] Since Guccio personally already had the ability to irritate others and make fights erupt around him before getting Survivor, he is unaffected by the Stand's ability.

Survivor indirectly increases the fighting prowess of its victims, as they ignore pain and fear, and are focused on fighting and hurting their opponents, making them capable of otherwise inhuman feats and able to simply counterattack as they are attacked.[5][6] Additionally, those under the influence of Survivor are granted the ability to visualize the muscles of the enemy, seeing the strong points as shining stars,[2] while weak points are blackened.[6]

Survivor has a separate history to that of its known User, Guccio.

In 1982, in the Lorraine region of France, a group of six people went on a hiking trip in the mountains and had gotten lost. All six were eventually found dead, their bodies showing signs of intense struggle amongst themselves. After looking into the matter, DIO discovered that the night before their deaths, the hikers had stayed in a mountain lodge and quarreled with its owner over his body odor. As a result of his anger, the lodge's owner's Stand ability was triggered, causing the hikers to massacre each other the next morning.