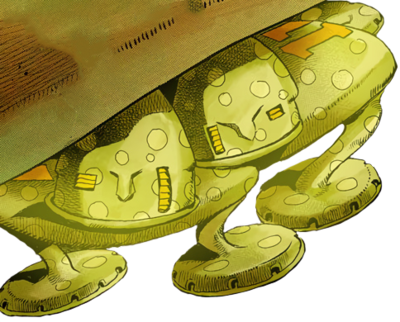 Les Feuilles (オータム・リーブス, Ōtamu Rībusu)[a] is a Stand belonging to the Ginkgo biloba trees that grow on Shakedown Road featured in JoJolion. This Stand is a colony of small creatures dwelling under fallen ginkgo leaves and can instantly transport items and people along the paths created by the leaves.

Les Feuilles is a colony of tiny Stands that appear as round, flat creatures with cylindrical heads and sucker feet; they're small enough for multiple of them to stick under leaves. They're all patterned with polka-dots and the number 11 on their sides, perpendicular to their heads.

Les Feuilles only manifests at Shakedown Road, under the leaves of the Ginkgo biloba trees.

Les Feuilles is an unusual Stand in that they have no real user, and anybody can use their actions to their advantage if they know how to. They do not have any combat ability whatsoever, but they're extremely useful to the denizens of "Shakedown Road" in setting up crimes. 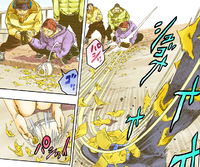 Les Feuilles hides under the fallen ginkgo leaves on the road and promenade.[1] If enough leaves connect to form a path, anything or anyone that touches the leaves is instantly transported from one end of the path to the other.

The movement is incredibly fast, at least faster than the eye can see. Moreover, should someone who is unaware of the Stand step on the leaves, they can get transported without their knowledge. However, a camera may be fast enough to record the phenomenon.[2][3] While an object is transported, it is possible to intercept it by stepping on the taken path, thus cutting it off and forcing the object to stop at your feet.[1]

The people of Shakedown Road typically set up paths to cause an unaware sucker to damage a possession and then pressure the victim into giving them money as compensation.[2] Les Feuilles can also be used to transport objects stealthily. Someone used to Shakedown Road may expertly use the leaves to transport themselves at high speed; for instance, three thugs could catch up to Joshu despite a considerable headstart.[1]

Les Feuilles was first shown to have existed in 1901. According to the Shakedown Road Veteran's telling of the Legend of Johnny Joestar, they were the cause of Johnny having his head crushed by a large boulder.[4]

In the present day, they are used by the inhabitants of Shakedown Road to extort people, having been known for several generations. Josuke and Joshu have a run-in with the scammers on the street, and both discover the existence of Les Feuilles; however, they only accomplish paying off the debts forced onto them and leave the road with its status quo intact.[5]