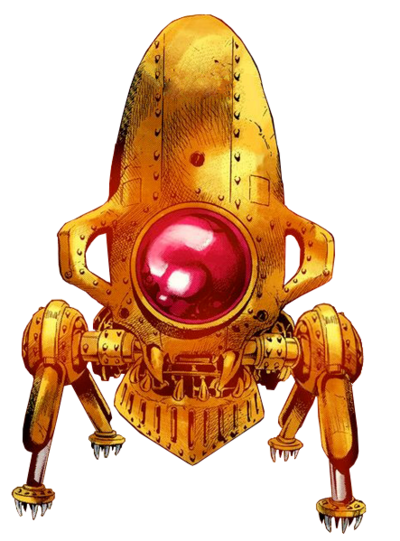 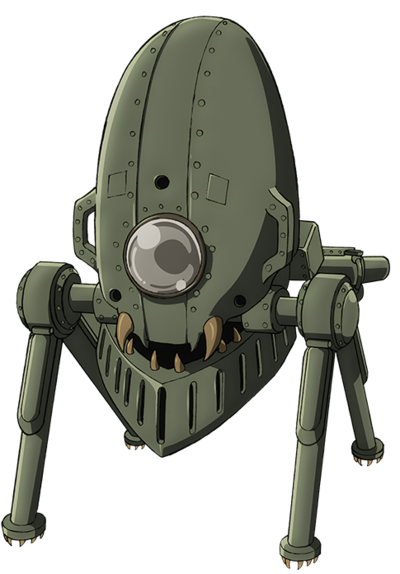 Destructive Power
B
Speed
C
Range
D
Stamina
B
Precision
E
Developmental Potential
C
A
B
C
D
E
A: Very Good
B: Good
C: Average
D: Poor
E: Very Poor
“
That Stand can fire darts... If I got in too close or I got caught by surprise, I could be in real trouble.
”
—Josuke Higashikata, Chapter 327: Let's Go Hunting!, Part 3

Ratt (ラット, Ratto) is a pair of Stands used by the rats Bug-Eaten and Not Bug-Eaten, featured in the fourth part of the JoJo's Bizarre Adventure series, Diamond is Unbreakable.

Each rat possesses its own Stand, which takes on the appearance of a small gun turret that can shoot flesh-melting darts. 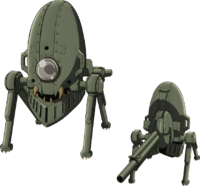 Virtually identical, each Ratt has the appearance of a turret-like machine sporting a long-barreled cannon, resembling a mix between a skeleton and an old-fashioned cannon.[2] The main body resembles an iron helmet supported by four legs, featuring a camera lens in the middle and two handles on the sides. The bottom side has a structure resembling a jaw accompanied by numerous sharp fang-like teeth. The Stand flips over and turns to the opponent when it prepares to fire, revealing the backside of the lens to be a target scope. Josuke notes to himself that it's an unusually mechanical Stand for a rat.[3]

The series is known for alternating colors between media, the information presented below may or may not be canon.
Turret(Gold, red lens)
Turret
(Army Green, yellow machinery, gray lens, yellow teeth)

“
The users are two brown rats, whose abilities manifested due to Akira Otoishi's Bow and Arrow. The design and abilities of the Stands are identical.
”
—JOJO A-GO!GO!: STANDS, p. 66

Ratt is an especially deadly Stand not only because of its power, but also its range and the small size of its users. Only one hit is needed for the rats to defeat their opponents, while human-sized Stand users will have trouble finding and striking a nimble rat.

Ratt can fire off barbed darts which will melt anything upon impact, be it flesh or even metal.[3]

The effect of the corrosive darts

Once hit, a large part of the body will immediately melt into organic material, a nearly impossible to heal injury that only Crazy Diamond could undo.[3] The melted victims can then be molded into a shape such as a cube if multiple are clumped together, in which case the flesh fuses together and eventually takes a gelatinous texture.[4] In some cases, the victims continue to live (presumably because their head is intact).[5]

Ratt can shoot darts up to 60 meters away, fire in bursts, and can even bounce the dart off obstacles to hit from blind spots.[6]