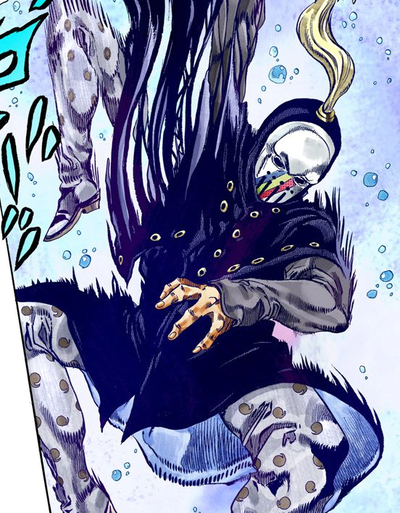 Destructive Power
C
Speed
C
Range
B
Stamina
B
Precision
D
Developmental Potential
D
A
B
C
D
E
A: Very Good
B: Good
C: Average
D: Poor
E: Very Poor
“
My ability's name is 'Catch the Rainbow'. The raindrops I touch... I can 'stabilize' in the air... Just like crossing a 'rainbow'... or walking on a 'glass board'... You can't assume that the rain is always pouring down.
”
—Blackmore, SBR Chapter 37: The Green Tomb, Part 2

Catch the Rainbow (キャッチ・ザ・レインボー, Kyatchi Za Reinbō) is the Stand of Blackmore, featured in the seventh part of the JoJo's Bizarre Adventure series, Steel Ball Run.

Worn by Blackmore as a mask, it grants him the ability to walk on rain and manipulate raindrops.

Catch the Rainbow takes the form of a mask worn by Blackmore. It has a prominent brow ridge above its eye holes, no nose, and the bottom has five vertically long triangular slits, dotted by five holes above them.

It has a light color aside from three colorful stripes crossing from its left eye hole to its right cheek. The stripes were designed to be a rainbow version of a hockey mask.[1]

The series is known for alternating colors between media, the information presented below may or may not be canon.
Mask
(Porcelain white with blue, green, and red stripes (from left to right).) 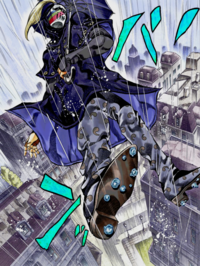 Catch the Rainbow allows Blackmore to utilize or manipulate rain in various unusual ways, such as allowing him to travel quickly or for fighting purposes.

The most basic ability of Catch the Rainbow is to stop raindrops in their tracks and make them float in mid-air,[2] becoming solid enough to support Blackmore and also deflect projectiles such as a Steel Ball.[3] With this, Blackmore is able to tread on them and reach high altitudes. He can either stop a few select raindrops to walk on, stop several of them over a large zone[3] or create blades out of them.[4] If a target attempts to move through rain stopped by Catch the Rainbow, the drops will tear and penetrate them, potentially creating fatal wounds.[4]

Blackmore is also able to meld with rain.[2] He can let the raindrops fall through him and create holes in his body, with the disappearing body parts materializing from the same raindrops at a distance from the body and remaining functional despite the separation. For instance, he can project his mouth at a distance and talk to someone.[4] He can fuse entirely with the rain and become intangible like water, evade gunshots, and also travel at high speed across great distances as long as there is rain.[4]

Blackmore demonstrates the ability to plug his wounds with raindrops and stem all bleeding, although it is only a temporary measure.[5]