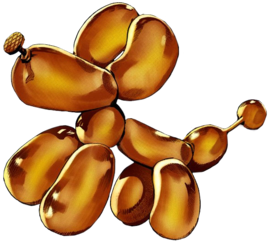 Destructive Power
D
Speed
D
Range
D
Stamina
A
Precision
E
Developmental Potential
B
A
B
C
D
E
A: Very Good
B: Good
C: Average
D: Poor
E: Very Poor
“
It will now attack the woman whose 'scent'... matches the one that it has just memorized. That is the world in which my balloon dogs, 'Tubular Bells', operate in.
”
—Mike O., SBR Chapter 48: Tubular Bells, Part 1

Tubular Bells (チューブラー・ベルズ, Chūburā Beruzu) is the Stand of Mike O., featured in Steel Ball Run. It is an ability Stand that allows Mike O. to blow into metallic objects and shape them as if they were balloons, then command said objects.

Tubular Bells manifests mainly upon Mike O.'s application of his ability. His balloon animals in particular assume some independence, and take on small, shining eyes. The various shapes Mike O. makes his balloons into were inspired by different types of balloon art.[2]

Tubular Bells is mainly a versatile ability-granting Stand which enables Mike O. to create semi-automatic balloon animals, thus allowing him to deploy his Stand over long distances and have a comparatively wide array of options during a fight.

Like many ability-granting Stands, Tubular Bells is poor at defending its User, which proves to be Mike O.'s demise against Hot Pants' Cream Starter. 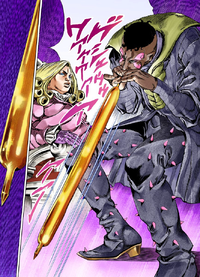 Tubular Bells grants its user Mike O. the ability to inflate metal items by blowing into them like balloons and likewise shape them into automatic drones he can command.[3]

Mike O. simply has to blow into any metallic object, for instance nails,[3] screws, fences or tin shutters,[4] to inflate them like he would a rubber balloon. The inflated metal then seems to partially take on the characteristics of a balloon, as it is able to be easily reshaped by Mike O., floats midair[4] and has great elasticity as it can fit inside narrow spaces.[3]

The shape of the balloon seems to depend on the shape of the inflated object. With long nails, Mike O. forms long thin balloons,[3] while most are typically round.[4]

Mike O. is able to model

the metal, and chooses to create balloon animals most of the time, for instance, dogs out of nails or birds out of tin shutters. The balloons can be remotely modeled, and they act on Mike O.'s command, able to follow simple instructions. For instance, he can register someone's scent into a balloon, which will automatically attack anyone with the same scent.[3] However that autonomy also means that the balloons can be lured into attacking someone unrelated.[4]

When the balloon animals make contact with their target, they burrow into their body and revert to their original form, harmfully embedding their constituent object there. By converting a flat heavy metal object into a floating balloon, it is possible to fashion a guillotine with enough potential energy to tear down a wall.[4]