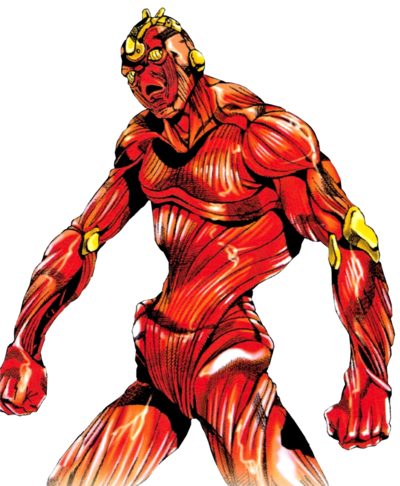 Destructive Power
A
Speed
B
Range
A
Stamina
A
Precision
E
Developmental Potential
E
A
B
C
D
E
A: Very Good
B: Good
C: Average
D: Poor
E: Very Poor
“
How many have hit you already? Hmm? Weird...there are burning rocks flying from the sky towards me...are they meteors? Is this my strength...?
”
—Viviano Westwood, SO Chapter 65: The Secret of Guard Westwood, Part 6

Planet Waves (プラネット・ウェイブス, Puranetto Weibusu) is the Stand granted to Viviano Westwood by Whitesnake, featured in the sixth part of the JoJo's Bizarre Adventure series Stone Ocean. Resembling a flayed humanoid, Planet Waves draws small meteorites from space to Westwood, turning them into deadly projectiles against his opponents.

Planet Waves is humanoid in shape, its body covered with a pattern akin to muscle fiber. Its head resembles a human heart with metallic/technological apparatuses.

The series is known for alternating colors between media, the information presented below may or may not be canon.
Body(Red-orange with yellow accessories.)
Eyes(Yellow)

Despite having a humanoid body, Planet Waves is never shown attacking, thus its physical capabilities are unknown. However, its power over meteorites makes it dangerous to fight head-on and in the open. 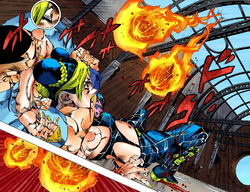 Planet Waves draws distant meteoroids toward its user, colliding with any person or object within their vicinity.[1] It attracts the small rocks from space, which then fall to Earth precisely toward the user with enough speed that they can tear off chunks of the body[2] and cannot be heard until impact.[3] Moreover, the meteoroids heat up to 3,000 °C (5,430 °F) during their entry, increasing their lethality. The meteors appear in a time span of anywhere from minutes to seconds between each meteor.[4]

To protect the user in the event that a meteor would hit him, they will disintegrate just before making contact, no matter what happens during their descent.[1] However, it can be bypassed by putting an object on the path of the meteor which will absorb the strength of the fall and hit the user with full force.[5] Although the meteoroids Planet Waves summons are usually small, it can also attract more massive meteors to shoot them through sturdy obstacles like brick walls.[6]

Planet Waves was originally called Earth Wind and Fire (アース・ウィンド・アンド・ファイヤー, Āsu Windo Ando Faiyā) in the Weekly Shonen Jump publication, despite the name already being used for an earlier ability that appeared in Part 4, although written differently. The name was changed to "Planet Waves" in later editions of the tankobon.

Hirohiko Araki created this Stand with the thought that it'd be weird to see meteorites falling from the sky.[7]