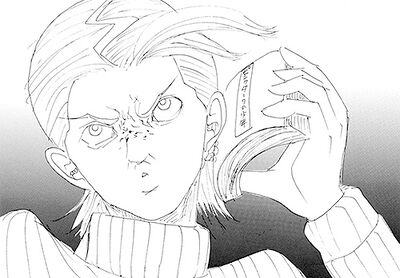 Doppio's Stand is the unnamed Stand of Vinegar Doppio (Universe 37), featured in the light novel JORGE JOESTAR. The Stand allows Doppio to turn standard objects into cellphones for long-distance communication, which anybody can use.

Doppio's Stand does not have a physical form. Rather, the Stand manifests in physical objects. Examples of these objects include a pebble, rubber band, shoe,[1] a book (specifically volume 112 of Part 8 of Rohan Kishibe's Pink Dark Boy manga), a baseball cap, a light bulb, and partially a human skull.[2] When a call is in progress, the object gets a display and buttons but keeps its original shape.

Doppio's Stand is primarily useful for its highly efficient long-range communication, though it has the potential to be dangerous in combat as well. The Stand's creations serve as the primary communication item for Passione, allowing the gang to connect with their numerous offices in Italy while in Morioh, Japan. Jorge Joestar, Daibakusho Curry, and Runbaba 12 also use the phones to stay in contact with the gang members.

The Stand ability is a representation of the original universe Doppio's hallucinations in Vento Aureo, where he would believe ordinary objects such as a cigarette and a frog were phones.

Doppio's Stand is capable of turning ordinary objects into portable phones. There appears to be no limit to what Doppio can turn into a cellphone, though larger objects are more difficult to use (as when he used a book as a phone, he had to physically curl it to use it effectively). Multiple objects can be converted into phones at the same time. However, objects that are turned into phones will permanently remain as one. The only way for the ability to be removed is to break the object itself.[2]

The primary feature of these phones is sending and receiving calls. They also have the option of redialing numbers.[3] When a call is sent to a phone, the receiving phone will vibrate and audibly ring with the ringtone "Plu pon pin para para pon" (プルポンピンパラパラポン♪) or "Tomememe" (トゥエムエムエムエム) when redialing. A display will appear which allows the receiver to accept these calls.[1]

The phones are capable of connecting through extremely long distances, as they receive a signal in space and also across different universes and parallel dimensions.[4] However, if there is an inconsistency in spacetime then the phones will not work, such as when England gets transported from the first universe to the thirty-seventh universe while within the giant Antonio Torres's stomach.[3]

Doppio can also use his Stand for attacks. By turning parts of someone's body into a phone, the ringing and vibrations can cause internal damage. He uses this on George, turning a portion of his skull into a phone. The sudden vibrations of his skull ringing incapacitates George by numbing his brain and harming his equilibrium.[2]