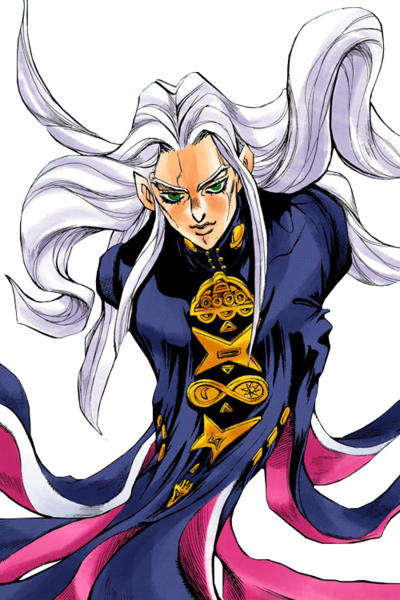 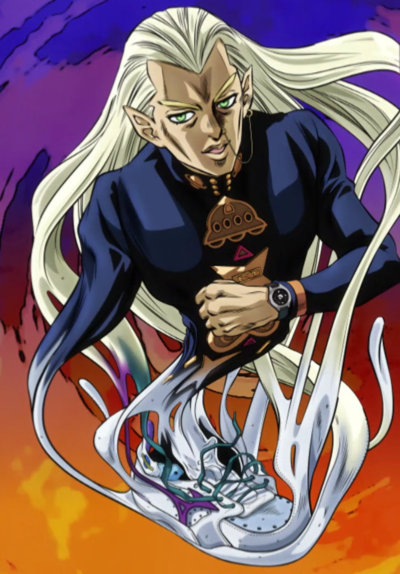 Earth Wind and Fire (アース・ウインド・アンド・ファイヤー, Āsu Uindo Ando Faiyā) is the power possessed by Mikitaka Hazekura, featured in the fourth part of the JoJo's Bizarre Adventure series, Diamond is Unbreakable.

Due to the mysterious circumstances surrounding its user, it is unknown whether Earth Wind and Fire is an actual Stand or an inherent extraterrestrial alien ability. It grants Mikitaka the ability to shapeshift.

Like all abilities directly conferring supernatural powers to their users, Earth Wind and Fire doesn't actually possess a physical form. Instead, it is bound to its user's body.

As a result of Mikitaka's self-proclaimed alien identity, there is speculation regarding the true nature of Earth Wind and Fire and its origin. Due to the circumstances surrounding Mikitaka and the author's own purposeful ambiguity, it is unknown if it is an alien ability or a Stand.[2]

Earth Wind and Fire allows Mikitaka to transform into any object.[3]

When transforming, Mikitaka decomposes himself into a cluster of strips of an unidentified substance before recomposing himself into one or several objects of his choosing, replicating their appearance, weight, and texture.[4]

When transformed into an object, he also takes on the properties of the object. Thus morphing a hand into an ice cream cone will make it cold[5] or morphing himself into a binocular enables him to also observe things from afar.[6] He can also partially undo the transformation.

Earth Wind and Fire seems able to combine its strength with those of other people: when Mikitaka turned into sneakers for Josuke to wear, he notes that their strength combined is what made them able to move so fast.[4]