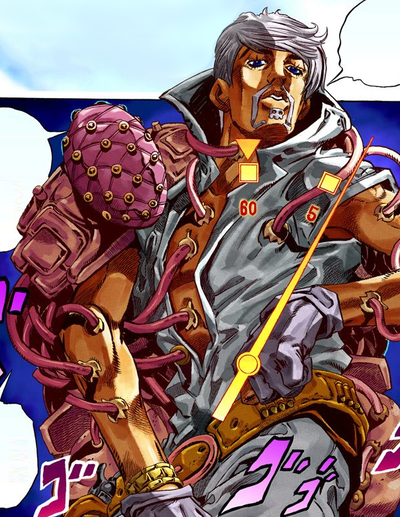 Mandom (マンダム, Mandamu) is the Stand of Ringo Roadagain, featured in the seventh part of the JoJo's Bizarre Adventure series, Steel Ball Run. Only possessing a humanoid head and shoulders, Mandom grants Ringo the ability to rewind time six seconds in the past.

Mandom takes the shape of a head as the center of what looks like an enlarged, wrist-based item of metallic jewelry, splitting and extending at its ends into long, flowing tendrils. Dark, its face is featureless except where patterned by a number of small spheres resembling eyes; joined by lines to form a pattern of horizontally oriented lozenges.

Its design was inspired by the "Major League Training Brace" from the Star of the Giants manga series.[2]

Mandom is pink in the colored manga.

The series is known for alternating colors between media, the information presented below may or may not be canon.
Body
(Pink head and tendrils, salmon shoulderpads, gold and black "eyes".)

Mandom never portrays any form of combat ability, but rather, supports Ringo during his duels. Although keeping its ability a secret would be an advantage, Ringo prefers to explain its power to his opponent due to his beliefs. 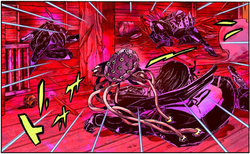 By turning a hand on his wristwatch, Mandom will rewind time by exactly 6 seconds, similar to Killer Queen Bites the Dust, returning everything to how it was 6 seconds ago.[3] Ringo himself does not need to turn the hand to activate the ability; moving it with something like a bullet would also trigger the rewind.[4]

The wristwatch that Ringo wears is actually a psychological switch and is in theory unneeded to activate Mandom's power.[5] The process of rewinding back 6 seconds is supposedly instant and unnoticeable according to all individuals affected, but is visually represented in the manga by everything being rewound.[3] Ringo claims that he is free to rewind time by 6 seconds without limitations other than turning the hand.[4]

Nearby individuals affected by this ability will remember the events of those rewound seconds and thus unaware victims will be disoriented. Ringo used this property to disorient Johnny, Gyro and Hot Pants in an unfamiliar forest and make them lose themselves inside it.[3] However, those prepared well, like Ringo, take advantage of the rewind to avoid attacks or set up unexpected strikes.[4]