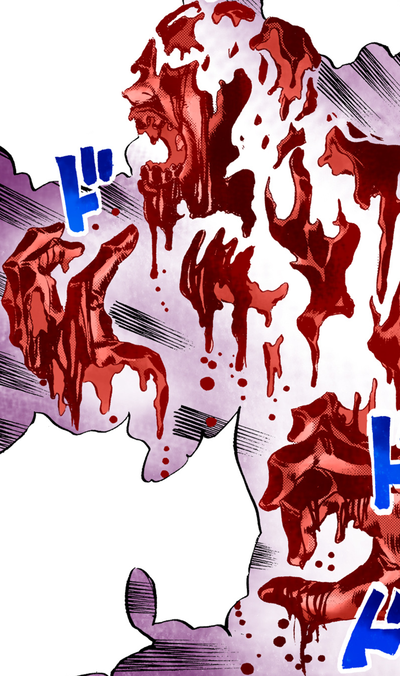 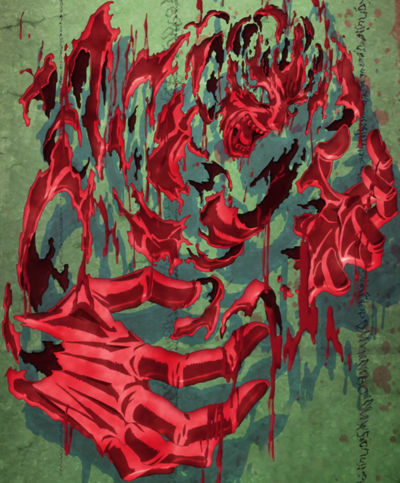 It is a pure ability Stand that allows Sports Maxx to turn deceased corpses into invisible zombies, including his own; in addition to reanimating partial dead remains.

Since it lacks an appearance, the undead form of Sports Maxx partially covered in blood has been used to depict the stand on several occasions.

Limp Bizkit is an unusual ability Stand as it persists even after the death of the user, allowing Sports Maxx to control it after he expires. After becoming undead himself, his command over the invisible zombies makes him very deadly and difficult to defend against.

Limp Bizkit enables Sports Maxx to create "zombies" from the corpses of the dead at his command.[1]

When Sports Maxx activates Limp Bizkit upon command, all corpses will generate invisible wraith-like undead.[1][2][3] These "zombies" manifest as tangible yet invisible spirits that climb out of their corporeal bodies and attack anyone nearby at the user's bidding. The ability works on anything deceased the user has previously interacted with, regardless of the species or the date of death, such as maggots, taxidermied animals (such as birds and alligators), deceased prisoners from the Green Dolphin Street Prison graveyard, and even Sports Maxx himself.[1][2] Sports Maxx also displays the ability to track the zombies he creates to a degree, as he was able to sense the Green Baby and feel its movements.

Despite his misgivings, Sports Maxx is able to use his ability to affect partial remains, such as body parts, as shown when he helped Whitesnake to revive a version of DIO's spirit from his bone, which manifests in the creation of the Green Baby. Despite being unable to command nor control its actions, Maxx could sense the bone's presence from afar with his ability and track its location to the Ultra Security House Unit.[7]