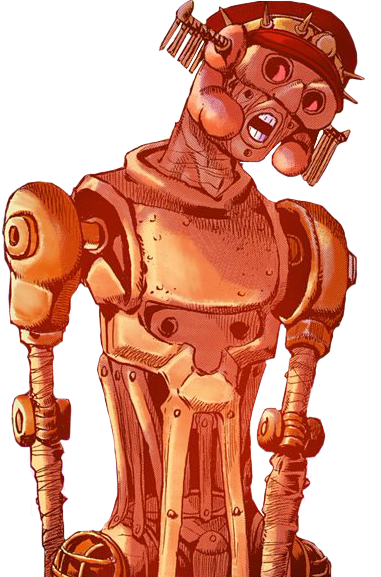 Little is known about Speed King's abilities but it is clear that its heat powers are lethal at both close and long range. Speed King is shown to be physically able enough to rapidly pummel enemies,[1] but the extent of its power is never revealed. 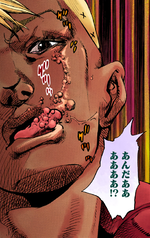 Heat increases inside of Ojiro's body, to the point the blood in his blood vessels starts boiling

As explained by Jobin, Speed King has the primary ability to store heat and temperature within a short localized point, from single objects such as the surface of paper money or even a particular spot on the human body.[3] However, the heat can then be transferred to anyone who touches said point where the heat is stored. Speed King can only affect objects within 10 centimeters,[4] but it is shown that said objects can travel far away from Jobin and still be affected by Speed King's heat storage. For instance, Ojiro Sasame could travel from the Higashikata House to downtown Morioh and still be affected.[5]

Since Jobin can heat sodium chlorate enough to produce oxygen,[1] it can be inferred that it can raise the temperature to at least 300 °C. He has used it to melt the wax stuffed into his beetles after brushing them with a paintbrush and has given Josuke a nosebleed simply after offering some tissues to wipe his face with. This power can be weaponized and used to heat people's blood vessels, boiling the blood inside to render them unconscious or even kill them,[6] when applied to the temples the heat can become so damaging the eyes burst.