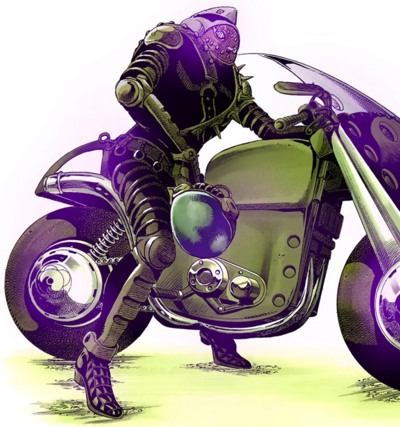 Destructive Power
C
Speed
B
Range
A
Stamina
A
Precision
E
Developmental Potential
E
A
B
C
D
E
A: Very Good
B: Good
C: Average
D: Poor
E: Very Poor
“
If something is closed and I open it, I'll be automatically pursued and attacked by that mysterious enemy rider...!
”
—Josuke Higashikata, JJL Chapter 15: "Paisley Park" and "Born This Way", Part 4

Born This Way (ボーン・ディス・ウェイ, Bōn Disu Wei) is the Stand of Kei Nijimura, featured in the eighth part of the JoJo's Bizarre Adventure series, JoJolion.

It is a humanoid Stand dressed in heavily armored biker gear, riding a large motorcycle. Attached to a designated target, it will instantly appear near them when they open something, conjuring freezing cold winds to assault them.

Born This Way is composed of a humanoid rider and a motorcycle. The rider is covered by black clothes similar to protective motorcycle clothing, including a helmet with a visor. As such, it is not easily identifiable as a Stand, but when its helmet is removed, it has a stout, robotic head and face, lending it an odd appearance as it doesn't appear to have a distinct neck, its head instead emerging directly from its torso. The head also has a fin-like horn on the top.

The motorcycle is a heavy, almost armored black sport bike. The front wheels feature decals of a smiley faced flower on the hub caps and the front fork has a stitched design similar to the face of the rider.

The collar of the helmet features a skull emblem similar to those found on her brother's stand.

Born This Way mostly avoids engaging in combat directly, instead ramming opponents with its bike. Knocking the rider off the bike causes it to make a "Shuu" noise and make a quick, almost clumsy dash to get back on.

Born This Way is an automatic Stand defined by constant power independent of the distance from Kei, and is unusual in that it rides a motorcycle.[1] Equipped with a helmet and motorcycle riding gear,[2] Born This Way is more resilient than most Stands. The bike is durable enough to withstand Soft & Wet's punches,[3] and as a vehicle, can be used to ram into people. 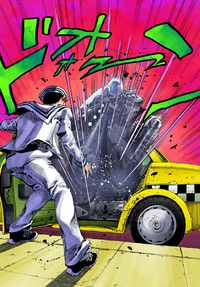 Born This Way appears as a taxi door is opened

Kei Nijimura can employ Born This Way on any chosen target, but it only appears near them when they "open" something. In order to target a person, Kei must touch them at some point, but is otherwise able to act freely while her Stand attacks.[4]

The act of opening may concern doors, notebooks and cellphones[4] but not body parts such as opening one's eyes.[5] The individual does not have to intentionally open something, as merely touching an object as it is opening applies, for instance when Josuke backs into a taxi causing its driver to remotely open the door, or when Kei throws a loose pen at him, causing the cap to fall off when it hits.[6] Born This Way immediately appears near the target when they open something, but similarly disappears if anyone closes the relevant open object.[3]

When Born This Way appears, it can conjure powerful and cold gusts of wind to attack. The wind is strong enough to push back a grown man, and can violently displace objects.[1] Moreover, it causes an unnatural cold. The temperature dramatically drops where it blows, to the point the eyes can begin to freeze.[2] If the wind persists long enough, a large quantity of snow may appear, and Born This Way can also propel shards of ice into someone as projectiles.[3]

Born This Way was originally called Going Underground (ゴーイング・アンダーグラウンド, Gōingu Andāguraundo) until the release of the JJL Volume 4 tankobon. Despite this change, Kei Nijimura's design still features the initials "G.U." on her clothing, even when she reappears late in the part. To make it clear at first glance that it was definitely a Stand and not a human, it was designed to have a neckless feature with a robotic face when its helmet is removed.[7]