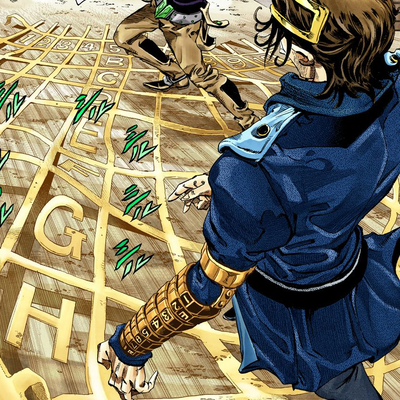 Chocolate Disco manifests itself as an armband on D-I-S-C-O's forearm, which has the ability to divide the nearby environment into a grid and reposition anyone caught in the grid at will.

Chocolate Disco is a forearm guard resembling a vambrace. It has a grid pattern of 26 lettered rows and 10 numbered columns serving as coordinates, similarly to the board game Battleship.[1] Each cell can be pressed.

The series is known for alternating colors between media, the information presented below may or may not be canon.
Arm guard and grid(Yellow-brown)

Chocolate Disco functions as a tool that grants D-I-S-C-O great control over flying objects in a large zone. As a result, Gyro Zeppeli is at a disadvantage against him with his Steel Balls.

However, its tool-like nature and lack of any way to directly harm someone means that D-I-S-C-O is powerless at close range and relies on using miscellaneous objects he keeps on him to attack. 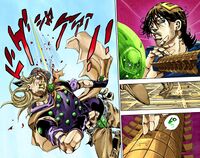 When D-I-S-C-O activates Chocolate Disco, a grid with the rows labeled as letters and columns labeled as numbers appear from his feet, covering about twenty feet in front of him.[2]

D-I-S-C-O typically makes various harmful objects like nails or acid fall down on his target and also defends himself from projectiles by teleporting them away from him and into the assailant.[2]

The weakness of this ability is that D-I-S-C-O must correctly assert in which coordinates he wants to teleport the flying objects to attack. If he misses, he becomes defenseless at close range.[3]