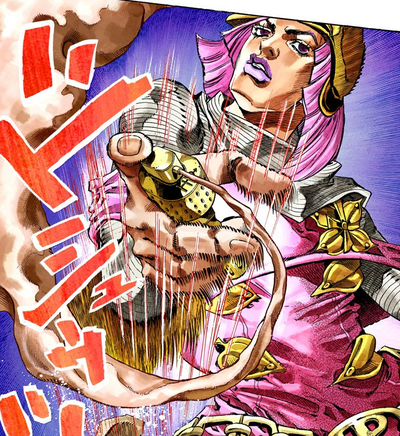 Cream Starter takes the form of two hand-held spray canisters. The bodies consist of a nozzle attached to a half-cylindrical section covered in holes, a grip, and a vent-like bottom portion.

The series is known for alternating colors between media, the information presented below may or may not be canon.
Spray Can(Golden)
Spray(Light brown)

Much like Emperor and Beach Boy, Cream Starter functions as a tool and weapon for Hot Pants, who uses its ability to manipulate flesh in various ways. Its power is very versatile and deadly against humans.

Rare among Stands, Cream Starter can be used by anyone who can take hold of the spray, Stand user or not. Cream Starter also seems to be able to maintain itself and its power no matter the distance, and even through different dimensions of its user, as shown by Funny Valentine giving a Cream Starter to Johnny who uses it on his horse's throat.[1] 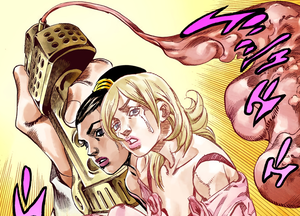 Hirohiko Araki states that when creating Cream Starter, he simply wanted a Stand that could "spray stuff out to let you transform and stuff". Additionally, the way it worked was based off of shaving cream cans, making a "fshhh" sound.[8]