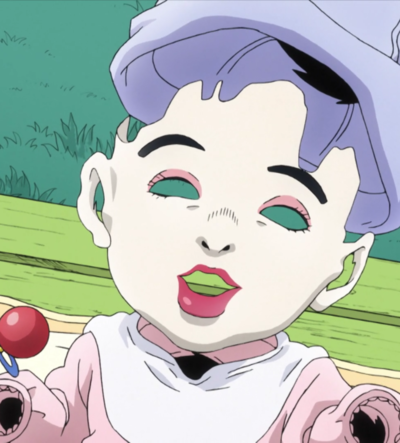 Destructive Power
E
Speed
E
Range
∅
Stamina
A
Precision
E
Developmental Potential
A
A
B
C
D
E
A: Very Good
B: Good
C: Average
D: Poor
E: Very Poor
“
This baby, it's not only her that can disappear! She can make stuff around her turn invisible too!
”
—Josuke Higashikata, Chapter 316

Achtung Baby (アクトン・ベイビー, Akuton Beibī) is the Stand of Shizuka Joestar, featured in the fourth part of the JoJo's Bizarre Adventure series, Diamond is Unbreakable.

It is a Stand that grants Shizuka the power to turn herself and her surroundings invisible.

Achtung Baby is bound to Shizuka's own body, granting her the ability to turn invisible. According to Araki, it's possible that the Stand has a physical form which is invisible as well, or it just doesn't have one.[2]

While theoretically useful, Achtung Baby is in practice an inconvenience as the user is a vulnerable baby that hasn't yet learned to control her power.

Shizuka can turn herself and anything near her invisible

Achtung Baby has the power to render its user Shizuka invisible.[3]

Shown to be linked to Shizuka's stress level, hinting at the ability being a defense mechanism, Achtung Baby enables her to become invisible. In cases of great distress, it will also cause everything within a certain distance of her to become invisible, be it Joseph's hands holding her,[4] her baby carriage or even the ground. At its full power, the invisibility will expand to a several foot-radius.[4]

The invisibility status seems to last even when affected objects leave Achtung Baby's ability range, as shown when the carriage which was carrying Shizuka had left a trail of objects with visually voided portions.[4]

Although everything under Achtung Baby's influence is invisible, they can still be detected if they emit a sound or an odor, as Joseph discovered when Shizuka defecated in his hand.[5]

By default, Shizuka is always shown to be invisible when calm, but the range of her power increases if she's startled. Should her emotional state be recovered, objects that were turned invisible by the ability will return back to normal.[4]