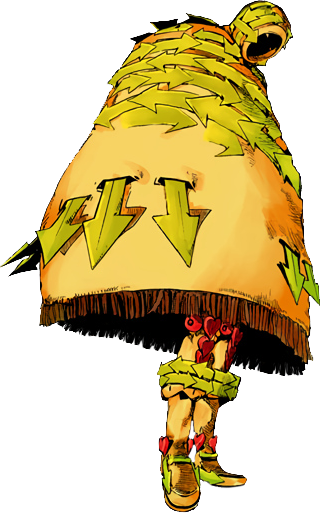 JJL Chapter 79
“
I can move energy to the points of the arrow marks! The name of my Stand is Awaking III Leaves. If I use three arrows, I can move energy the shortest route out of the space they surround!
”
—Mitsuba Higashikata, JJL Chapter 80: Doctor Wu and Awaking 3 Leaves, Part 2

Awaking III Leaves (アウェイキング・リーブス, Aweikingu Surī Rībusu) is the Stand of Mitsuba Higashikata, featured in the eighth part of JoJo's Bizarre Adventure, JoJolion. This cloaked Stand creates arrows that redirect anything that touches them into the pointed direction.

Awaking III Leaves appears as a hooded figure with its legs exposed. Its face cannot be seen but both of its eyes are visible. The cloak it wears has arrows decorating it in a circular pattern, with some facing downward. The arrows reach from the head all the way to the end of the outfit. At the very end there are tassels hanging from it, and more arrows pointing down in the back of it.

Its legs have three leaves on each knee, with one underneath the other, and mechanical looking joints on the side. Under the knees also have arrows, going in the same circular direction as the ones on the outfit. An arrow and leaves can be seen on the ankles as well as one larger arrow pointing to the direction of its toes.

The series is known for alternating colors between media, the information presented below may or may not be canon.
Body
(Orange-yellow cloak, green arrows, red accessories)
Eyes(Orange-yellow eyes) 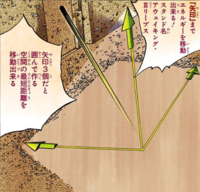 Awaking III Leaves can manipulate vector space by spawning arrows that Mitsuba can place in different directions. It can move energy to where the arrows are pointing, allowing it to negate any foreign entities in proximity to the user, the inside of the user, or wherever the arrows are placed. When placed on a person, it will expel foreign objects from their body in the direction of where the larger arrow is facing.[1]

If multiple arrows are placed, energy would move the shortest route out of the space the arrows surround.[2] Moreover, Mitsuba can multiply a force by stacking arrows in the same axis, for instance tripling the acceleration of an elevator by putting three consecutive arrows on its walls.[3]