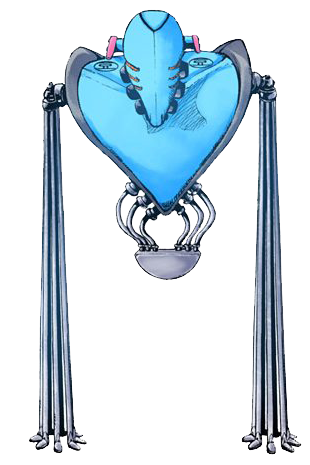 Doggy Style (ドギー・スタイル, Dogī Sutairu) is the Stand of Rai Mamezuku, featured in the eighth part of JoJo's Bizarre Adventure, JoJolion. This mechanical Stand allows Mamezuku to unravel his body into strips.

Doggy Style takes the form of a humanoid with an elongated and almost featureless face, save for 6 small eyes and beanpod-shaped protrusions from the sides of its head. It has a heart-shaped torso, whisk-shaped appendages for arms and the kanji for "bean" (豆, mame) written on its shoulders within a circle.

During its first appearance, Doggy Style seemed to have thin legs with rectangular protrusions. This was later changed for a half moon hanging from its torso by six tubes.

The series is known for alternating colors between media, the information presented below may or may not be canon.
Body
(Sky blue body, gray parts, silver appendages)
Eyes(Orange)
Ears(Silver and pink) 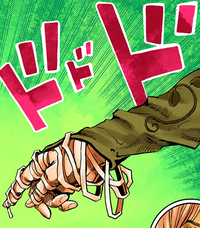 Doggy Style's full capabilities are unknown; however, its primary ability allows Mamezuku to "peel" his own body like an apple, unraveling his appendages into "wire rope" that he can control and manipulate.[1]

Mamezuku first uses it while on an aerial lift to retrieve a strawberry from a bush several feet below. The most advanced usage of this ability is when Mamezuku forms his entire arm into a makeshift crossbow, from which he fires a fork using his mouth.[2] Mamezuku can also send his rope fast enough to give it cutting power. He notably cut a garden of Locacaca plants this way.[3] He can also form his finger into a tight, seemingly sharp cone shape, which he can then extend to attack in a stabbing motion.[4]

Mamezuku is also able to completely unravel himself, as shown when he feigns death from Poor Tom's Ozon Baby. He seems to be able to unravel every part of his body besides his eyes and teeth, making it look like he had been crushed to death.[5] 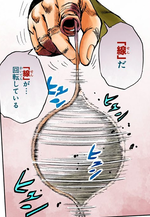 In his dying moments, Mamezuku reveals to Josuke Higashikata the technique of the Spin. He demonstrates this with Doggy Style by unraveling his hand and spinning the thread rapidly. The extent of Mamezuku's experience with the spin is unknown, as it may simply be a demonstration of the principle of "spinning" and not a Spin technique.[6]