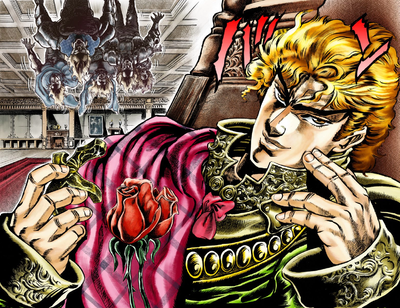 Vampires (吸血鬼, Kyūketsuki) are a supernatural undead creature featured in JoJo's Bizarre Adventure. Many vampires serve as antagonists in the first three parts of the series, Phantom Blood, Battle Tendency, and Stardust Crusaders.

Vampires can be created in two ways. One way is to wear the Stone Mask while exposing it to blood. The other way is for a vampire to give a corpse some of their own blood. According to the dynamics of the arts of the Ripple and Will Anthonio Zeppeli, all living beings on Earth bear energy from the sun, but vampires are considered beings whose natural "flow" of energy has been reversed and perverted. As such, both the sun and the Ripple are capable of quickly destroying vampires, as they return this "flow" back to normal.

Vampires are known for their battle cry "WRY" (ウリイ, Uri) and numerous superhuman traits. Their most obvious abilities are their raw strength, regeneration, blood-sucking tentacles at their fingers and near-immortality. On top of that, many vampires are capable of manipulating their bodies in creative and unique ways. Some as skilled as Dio have created their own unique abilities.

A secondary undead, created by a vampire who dons the Stone Mask, is commonly referred to as a Zombie (, Zonbi, lit. "Undead Person"); "Undead" (, Andeddo, lit. "the deceased") is also sometimes used.

Vampires are exceptionally strong beings. One weakened vampire could destroy a brick wall with one punch; Dio himself could lift a road roller and jump high in the air with it. A measurement of Straizo's strength set his finger pressure as 325 kg/cm2.
Superhuman Agility

Vampires are very agile, their speed having been likened to that of a cheetah by Speedwagon. They are able to jump several meters up in the air: for example, a weakened Straizo could jump up to 4.22 meters in the air. Other demonstrations of agility include casually hanging from a ceiling and leaping great distances.
Blood Sucking

Vampires consume the blood of living creatures to sustain themselves. Unlike traditional vampires, they suck their victim's blood with their hands, digging the fingers directly inside the target to suck their blood. Blood consumption will strengthen a Vampire and heal him if he was weakened before. In a weakened state, a Vampire will instinctively crave blood and may attack any victim to regenerate.
Bodily Mastery

User(s): All Vampires
Vampires can fully manipulate their own bodies, making a seemingly limitless number of special techniques possible. Wired Beck, for example, had the ability to form numerous spikes all over his body from his body hair; Nukesaku displayed the ability to form a second face on the back of his head with female features to deceive his opponents.
High-level Regeneration

A vampire's body is able to live even after having vital body parts amputated, as it is able to regenerate or reattach its own body parts. Vampires can also control their detached body parts. However, vampires can still die if their head is sufficiently damaged.
Anti-Aging

As demonstrated by Dio when placing his ear to the ground to listen for Jotaro's heartbeat or passing vehicles, vampires appear to have greatly heightened senses.[2]

User(s): Dio Brando
Vampires are capable of creating zombies from either living beings or deceased corpses by injecting them with a vampiric extract. Though zombies are also strong creatures, they are less powerful than their vampiric creator and will often obey them without question. In Stardust Crusaders, Dio perfected this technique, injecting others with his blood to sire other vampires.
Vaporization Freezing Technique(気化冷凍法 Kikareitōhō)

Dio is able to vaporize the moisture in his own body, enabling him to freeze his own body parts and transfer the loss of heat by touch. This ability is able to cancel out the Ripple by freezing the blood in the Ripple user's body. Though initially he only uses the ability to freeze individual body parts, Dio is later shown to be able to freeze an opponent's entire body in an instant.
Fusion

Vampires are able to graft parts of different organisms together. Dio displays this ability by creating animal-human hybrid zombies as pets, ultimately using it to graft his disembodied head on Jonathan's body.
Hypnosis

Dio is able to hypnotize individuals into doing his bidding. Not much is known about this ability, besides that it may possibly be nullified by the Ripple, as Poco's hypnosis wore off after being hit by Jonathan's Overdrive.
Space Ripper Stingy Eyes( Supēsu Ripā Sutingī Aizu, lit. "Space Splitting Eyes Spiked Surprise")

Vampires are able to expel pressurized body fluid from their eyes. Though the resulting jets of fluid are strong enough to cut cleanly through a stone column, they can be redirected by curved surfaces such as wine glasses.
Flesh Buds(肉の芽 Niku no Me) 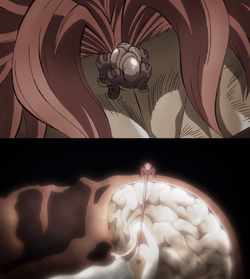 A vampire can create flesh buds from their own cells and insert them into the brains of living beings, subtly making them more susceptible to the vampire's influence. Over the course of several years, the flesh bud gradually devours its host's brain; if the vampire who created the flesh bud dies, the flesh bud will fuse with the host on a cellular level, mutating them beyond recognition. If someone tries to remove the flesh bud, it will grow tentacles in an attempt to kill both the host and the one trying to remove it. Once created by a vampire, the flesh bud can be inserted and triggered by anyone able to manipulate life at a cellular level.
The information below derives from a source not written by Araki. As such, it may or may not be considered canon.

In the light novel Over Heaven it is stated that flesh buds reduce the host's Stand power.[3]

User(s): Straizo
The vampire Straizo, having previously learned the art of the Ripple as a human, was able to use the breathing technique after turning into a vampire. Doing so, however, was an act of suicide, as the Ripple destroyed his own body.
Stands(スタンド Sutando)

User(s): DIO, Vanilla Ice
Like humans, vampires with unusually strong spiritual power can develop and control Stands, a physical manifestation of the user's spirit. As was the case with The World's timestop gradually lengthening as DIO's neck wound healed, the limitations of a vampire's Stand can be lessened or nullified over time.