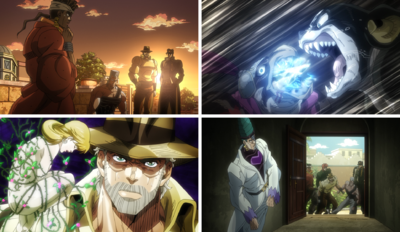 The Gatekeeper of Hell, Pet Shop, Part 2 (地獄の門番 ペット・ショップ その2, Jigoku no Monban Petto Shoppu Sono 2)[1] is the thirty-ninth episode of Stardust Crusaders, the fifteenth episode of the Egypt Arc, and the sixty-fifth episode of the JoJo's Bizarre Adventure anime. It covers last few pages of Chapter 225 through Chapter 227 of the manga.

The fight against Pet Shop continues. Wounded, Pet Shop uses his Horus at maximum power. Outmatched, Iggy is driven into the Nile and must hide at the bottom of the river.

Iggy is now fighting the falcon Pet Shop in the sewers, but is at a huge disadvantage against Horus's ice powers. When Iggy's paw is stuck inside an ice formation, it seems that the dog has no way to avoid Pet Shop's next round of icicles. However, Pet Shop realizes that Iggy has cut off his own paw and gone underwater.

For their part, the Joestar Group waits for the beggar but realize that he must have been attacked by a Stand User. Iggy eventually finds himself at the bottom of the Nile under a protective dome of sand thanks to The Fool. However, Pet Shop can also dive underwater and even hold his breath better than a dog thanks to his air sacs. The bird eventually finds the dome and threatens to shoot the dog with icicles. The Fool manages to deflect an icicle toward Pet Shop, but the bird then tries to crush the dome beneath a mass of ice.

Digging downwards only to find Pet Shop waiting for him, Iggy is left trapped while Pet Shop charges an icicle to kill him at close range. In a desperate act, Iggy uses the pressure from the collapsing dome behind him to rush forward and clamp Pet Shop's beak shut just as he prepares an ice missile, causing him to destroy himself. Exhausted from a lack of blood and coming close to drowning, Iggy reminisces his life as the king of the stray dogs in New York. Thankfully, he is ultimately rescued by the boy he protected earlier. 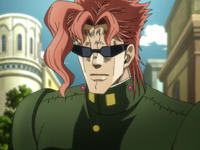 Iggy is subsequently found by a fully recovered Kakyoin, who reunites with the group after having a Speedwagon Foundation doctor treat Iggy's injuries. After a short but cheerful reunion, Iggy decides to lead them to DIO's Mansion, which they instantly recognize not only by its architecture but also the dreadful aura the building exudes.

With Iggy knowing the location, the group heads toward DIO's mansion

After crossing half of the globe and fighting dozens of Stand Users, the group has finally reached their final destination ready to finish a century old feud. However, they now must fight DIO and the Stand Users lurking inside the building. Upon opening the front door, the group sees a strange endless corridor, from which another of DIO's servants comes to confront them.

“
Episode 39 is the conclusion of the battle against Pet Shop. Here, Iggy is at his most virile and doesn't hesitate to thrown himself at the enemy. Thus, his last attack isn't made through his Stand, it's a genuine suicide attack where he leaps at the bird to directly bite its beak.

The flashback scene was not bad at all. Especially the shot where he's surrounded by female companions when he was having a good time in America. That was funny. It was me who selected these frames as the storyboard manager, but the animators were the ones realizing all that, many thanks to them.

Iggy came out gravely wounded from his struggle against Pet Shop, from now on he must walk on three legs... But at the same time, Kakyoin reappears, ready for duty.

Here they are in front of Dio's Mansion. But to really mark the spot, we had elongated this scene and added several shots to the storyboard. Thus, everyone remembers the battles they have made until now and ponders on the motivations that brought them to the final destination. All that being delightfully narrated by Toru Ookawa.

Telence T. D'Arby makes his appearance at the very end, at the entrance hall of the mansion, which builds a transition to the next episode.
”
—Naokatsu Tsuda, Blu-Ray limited edition commentaries