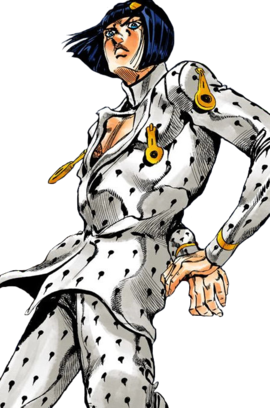 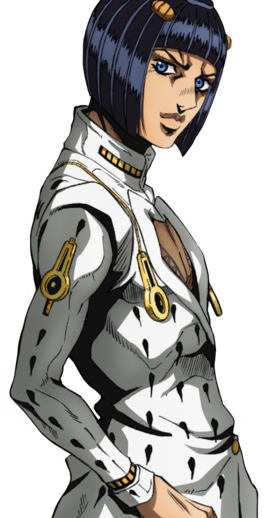 GioGio's Bizarre Adventure
SPOILER WARNING: Part 5 Spoiler details may follow.
The character featured in this article may also be referred to as "Bruno Buccellati".
“
To complete my mission and protect my men. Having to do both at once is what makes being a capo so tough. Are you ready for this? I know I am. (任務は遂行する 部下も守る。両方やらなくっちゃあならないってのが幹部のつられところだな。覚悟はいいか？オレはできてる。Ninmu wa suikō suru Buka mo mamoru. Ryōhō yaranakutchā nara naitte no ga kanbu no tsurare tokoro da na. Kakugo wa ī ka? Ore wa deki teru.)
”
—Bucciarati to Prosciutto, Chapter 493: The Grateful Dead, Part 6

and the leader of his own squad within the powerful Neapolitan gang, Passione. Sent out to track whoever attacked Leaky-Eye Luca and debuting as Giorno Giovanna's opponent, Bucciarati becomes the first to lend meaningful support to Giorno in his ascension in Passione's ranks.

During the events at San Giorgio Maggiore island, Bucciarati was given a lethal blow by the boss and was subsequently healed by Giorno's Gold Experience. Bucciarati eventually reveals that his life had ended at that time, however, his body continued to move only through the "life energy" that Giorno had given him.[20] In this undead state, Bucciarati lacks bodily functions such as breathing, a heartbeat, or the ability to feel pain. However, it also allowed him to be immune to the effects of Green Day, and although the decay of his body gradually made him functionally blind and deaf, he could still converse with others through the ability to observe and feel what individual souls thought.