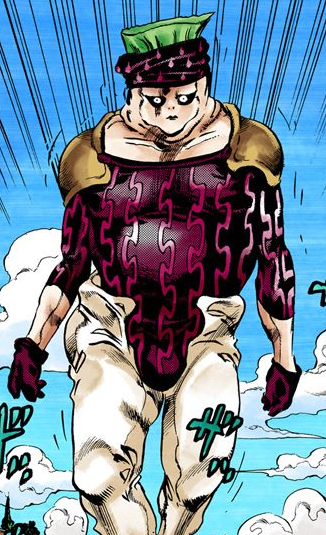 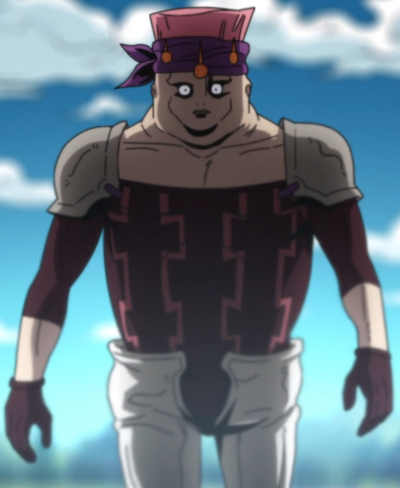 Shot to death by Guido Mista

GW Episode 24
“
That pitiful man. He was used and abandoned like an old rag. He died with hatred in his heart.
”
—Words about Carne etched by his own Stand, Chapter 534

Carne (カルネ, Karune) is a tertiary antagonist featured in the fifth part of the JoJo's Bizarre Adventure series, Vento Aureo.

As a member of Passione and by extension the Boss' Unità Speciale, he is sent on a suicide mission to kill Team Bucciarati and Trish Una. Although he dies, his now-invincible Stand Notorious B.I.G continues to exist and attacks the gang on their way to Sardinia. 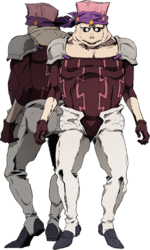 Carne is a neckless, overweight man sporting a hairstyle that can be described as an inclined crewcut. Carne lacks a nose, having only nostrils, and has black circles under his eyes. He also lacks external ears, which are seemingly represented by two holes on the sides of his head. His mouth appears in a small grin a majority of his appearance, save for its frown when Carne is injured and eventually killed. His pupils are heavily constricted, constantly staring forward. Overall, his expression appears ominous and intimidating. In the anime, Carne is about 160[2] cm (5 ft 3 in) tall, 170 cm including his hair.

Carne wears a stylized dark jumpsuit, on which shoulder-pads are added. He also wears saggy open-crotch pants and sports a large dark headband with the same symbols that pattern Bucciarati's suit. In the manga, these symbols take the form of a continuous pattern, while in the anime, his headband only has three. In the digitally colored manga, Carne wears a dark suit, headband, gloves, and shoulder-pads, and light-colored pants. In the TV anime adaptation, Carne wears again a dark suit and gloves, lighter-colored shoulder-pads, pants, and a dark headband with light symbols similar to Bucciarati's pants. In Chapter 532 of the colored manga, he has black lipstick, while in Chapter 533 and the anime he has none.

While Carne displays no personality before his death, it can be assumed that he was loyal to Diavolo enough to give his life for him. As he approaches Team Bucciarati with no visible weapons and a self-assuring smile, he was likely dispatched knowing the implications of his stand ability.

Carne was only described by his own stand from the graffiti it etched on Team Bucciarati's plane, implying that its user had a hateful personality. It described Carne as a "pitiful man" who was "used and abandoned like an old rag" and also described him as having "died with hatred in his heart" and "that hatred is his energy". The graffiti also stated that his "energy" was activated after his death and that he was never aware of it prior.

Notorious B.I.G is a strange Stand fueled by its user's hate, not unlike Ebony Devil; as such, its true power is only revealed when the user dies. At this point, it transforms into an autonomous, completely indestructible blob-like creature that attacks the fastest-moving object in its vicinity and devours anything it can to grow.

Carne is a Passione operative and member of La Unità Speciale, a squad of special Stand Users at the orders of the Boss. At one point, he acquired his Stand and learned how to use it. He was sent out by the Boss to fight Bucciarati's team, confronting them at an airport as the team tries to hijack a plane. Summoning his Stand Notorious B.I.G he is killed almost immediately by Mista, yet his Stand power remains, fueled by his grudge. Upon riding the plane, the gang starts to notice unusual things that are caused by Carne's Stand.[3]

Araki notes that he created Notorious B.I.G simply as an opponent for Trish to fight and enjoyed drawing Carne more than the Stand itself.[4] 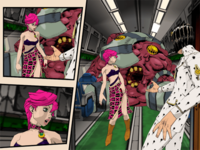 Notorious B.I.G in-game
“
A courageous (?) man who showed up to die! By the way, who checked what his ability was and how? It's a mystery.[5]
”
—GioGio's Bizarre Adventure Guidebook

Carne himself does not appear in the game. He is mentioned by the narrator as a Stand user that the protagonists killed offscreen before boarding an airplane. However, his Stand Notorious B.I.G is the main enemy faced in Chapters 8-1 and 8-2.