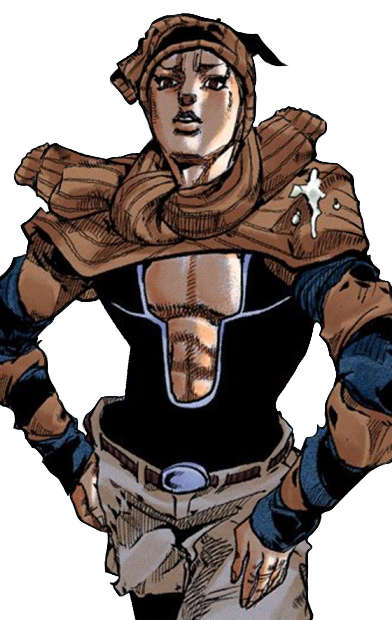 Aisho is a baseball stadium security guard who is secretly a Rock Human working under the Locacaca Organization as a smuggler and dealer. He is revealed to be a Stand user, wielding the Stand Doobie Wah!, after Yasuho Hirose and Tsurugi Higashikata tail him during their investigation on the Locacaca fruit.

Aisho is a slender man of average to below average height. His outfit is composed of a skin-tight black bodysuit with a hole in the chest, a khaki shorts with a belt, and a two-toned layered arm sleeves. He dons what appears to be a knitted wrap scarf with sleeves tied around his neck. He also wears a pair of sleeves around his head, similar to the pattern on his neck wrap scarf, with some of his hair poking out through the holes.

In a flashback with his former girlfriend, he wears an open-front hooded jacket that has decorative pompoms from the top of the hood until the shoulder, bearing resemblance to the spikes of a Locacaca fruit, along with plain shirt and pants. Underneath the hood, he also wears a knit cap.

The series is known for alternating colors between media, the information presented below may or may not be canon.
Skin(Fair)
Hair(Black)
Eyes(Dark brown)
Outfit
(Black bodysuit, brown and navy blue sleeves, beige shorts, dark brown shoes) 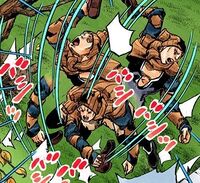 When he's upset, Aisho tends to lose his cool

Despite his initial stoic facade, Aisho is a paranoid man who easily gets nervous most of the time. He tends to overreact and notice small things, such as when a group of birds in the park all stared at his direction.[4] He can be frightened and intimidated by unseen enemies. However, this paranoia served useful to him, especially when he deduced that there were two people tailing him, Yasuho Hirose and Tsurugi Higashikata, and that they were also Stand users.[5] He would also briefly experience sudden flashbacks to previous traumatic experiences.[6] Aisho's nervousness may be attributed to some form of heart condition, as evident with him taking pills for his heart, since he is commonly shown with his heart rapidly beating during strenuous situations.[5]

Although Aisho seems to have had a genuine love for his former girlfriend,[7] he is somewhat gullible and can be quickly swayed. His misplaced trust culminated in her cheating on him and selling his house while he slept in his rock form.[8] Later, Josefumi Kujo and Yoshikage Kira influenced him into buying a specific medicine by making him believe it was highly sought after, even if he didn't seem to need the medicine, in order to secretly steal the Locacaca fruit that he had been possessing.[9]

Due to Aisho's rock physiology, he is unable to wake up for at least a month every time he falls asleep. This, along with his naivete, resulted in his former girlfriend selling his house during his dormancy.[7]

Aisho's Stand Doobie Wah! is able to create miniature tornadoes that automatically pursue its targets. It is capable of cutting flesh using the tornadoes' bases. This Stand is incredibly powerful, almost impossible to avoid or negate without ceasing to breathe entirely.

Aisho was originally born as a nameless Rock Human. At some point in the past, Aisho acquired his identity as "Aisho Dainenjiyama", worked as a security guard at Morioh's baseball stadium. At the same, he was employed as a dealer for the Locacaca Organization. 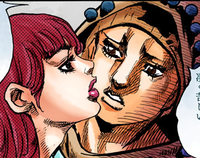 Aisho and his human girlfriend

In the past, Aisho owned a house and property in the countryside which his girlfriend would frequent during his periods of consciousness. During one such occasion, overcome with love and trust for this woman, he confided in her his secret and the conditions that caused him to disappear for a month at a time, thinking that she could be relied upon.[11] Due to this mistake, after waking up from his next sleep cycle he was shocked to find that his house was being demolished. His friend Yotsuyu Yagiyama rescued him and explained to him the situation; his girlfriend had not only cheated on him while he slept, but had also stolen the deed to his land and sold it to property developers so she could disappear with the money.

Aisho eventually came to be employed at the stadium that Yotsuyu designed. While secretly importing the fruits from Port Moresby to Morioh, Aisho was discovered by Yoshikage Kira while in rock form after the crate he was hiding in was damaged. Kira would then follow him and discover the trade of the Locacaca. He is shown making a trade with the local baseball star Atsunori Iwakiri, giving him a Locacaca for 200 million yen. At the same time, he's observed by Kira.

Eventually, Kira and Josefumi Kujo stole a branch of the Locacaca from Aisho. In a local pharmacy when another client, Josefumi took all the boxes of an eye medicine called "Eye Eye Syaa" save one, openly praising its potency and rarity. When Kira asked if there are any Eye Eye Syaa, Aisho was persuaded of its value and quickly took the last box for himself. On his way to another sale, Aisho tried the medicine. At that moment, Killer Queen burst a motorcycle's front wheel and caused an accident, which caught Aisho's attention. Immediately after this, Josefumi stealthily opened the case that Aisho uses to transport the Locacaca and stole some branches, replacing them with branches from another tree. Aisho didn't notice the theft as his sight is partially blocked by Soft & Wet's bubbles. Josefumi and Kira then depart, having successfully stolen the Locacaca branches.[12]

Aisho is first introduced into the story being viewed via Paisley Park interfacing with the security footage of Jobin being handed the mysterious fruit at a red light by Aisho. Yasuho proceeds to use her abilities to track his movements back to the stadium where he works and she theorizes that he must be keeping the trees which grow the fruits there.

Through the combined powers of Paisley Park and Paper Moon King, they are able to follow him by shaping a phone into one of Tsurugi's living origami. After witnessing Aisho delivering the fruit to an elderly wheelchair ridden man they observe it's restorative abilities first-hand; regenerating the man's lost leg while simultaneously performing 'equivalent exchange' by rendering him blind, although he rationalizes this by saying he can always buy another fruit to restore his sight and perpetuate the cycle.

Aisho soon realizes he is being followed and stomps on the origami, causing proportionate damage to both Yasuho and Tsurugi, and if not for Tsurugi's Paper Moon King making Aisho incapable of differentiating between the living origami and the surrounding foliage, their combined Stands would have not escaped. Distraught at the revelation that multiple Stand-users appear to be following him, Aisho promptly attempts to get in contact with Yotsuyu only to become more distressed when he finds that his number is out of service. Fearful that unidentified parties might have done something to his friend, he activates and sets his Stand Doobie Wah! on his trackers in hopes of killing them swiftly.

While his automatic Stand pursues the two of them Aisho tracks Doobie Wah!'s movement while contacting Jobin Higashikata to inquire about Yotsuyu's status and to see if he is in any way involved in these occurrences. Satisfied that Jobin is telling the truth, he converges on Yasuho and Tsurugi's location after the pair have had several near-fatal encounters with his Stand and confronts the two on their motives.

Aisho is run over by a bus, which kills him

No sooner than he discovers the identity of one of his stalkers to be that of Tsurugi Higashikata, Jobin's son, does Jobin himself arrive on the scene. Aisho quickly turns to question Jobin about his involvement in this conspiracy and to force him to consent to Aisho killing Tsurugi as a means of assuring his sincerity. However he is too late to discover that Jobin's figure is none other than the distorted image of an approaching bus and that he has been under the effects of Tsurugi's Stand this entire time. This revelation comes too late, however, and he is struck by the bus and killed,[11] at which point his body shatters into rock and is scattered across the street.