A summary of Bruno Bucciarati's history and movesets in video games. 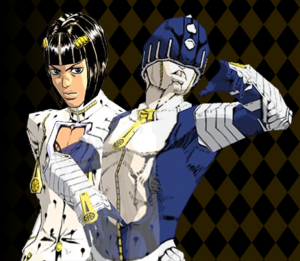 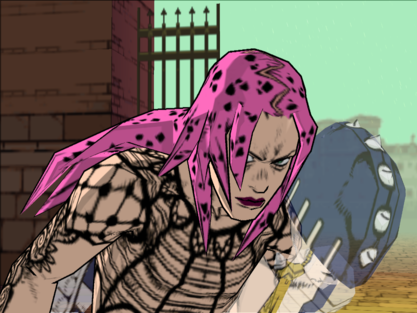 File:BucciaratiDiavoloPS2.png
Bucciarati makes his video game debut in GioGio's Bizarre Adventure as both a boss and a playable character. He is voiced by Takahiro Sakurai.

Bucciarati is the first enemy the player must face, appearing as an enemy in Chapters 1-1 and 1-2. As Chapter 1-1 mostly consists of a tutorial, Bucciarati has only half the health of a regular enemy. In Chapter 1-2, he first attempts to evade Giorno through the use of his zippers: at one of four places in the stage, Bucciarati can create a zipper and teleport to any of the other three. If he is dealt enough damage, he attempts to hide inside one of four civilians, requiring the player to find him in order to beat him. When he is fought directly as an enemy, his attack pattern primarily utilizes "My skills make you shiver, no?" and Stand Shoot attacks.

Although most of his moves are shared as a boss and a playable character, his zipper teleportation in Chapter 1-2 is exclusive to that stage. However, Bucciarati gains some new moves as a playable character: in Stand Mode, Bucciarati can cover large distances via a closing zipper, as well as temporarily disappear by traveling underground. During Chapter 11-2, the player plays as Bucciarati's soul in Diavolo's body; this unusual situation has no effect on his moveset.

My skills make you shiver, no?
Run, zipper! 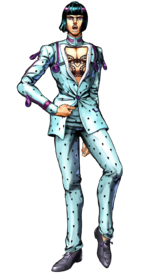 Bucciarati appears in All-Star Battle as a playable character, he was confirmed for the game alongside Narancia and Diavolo. His move set mostly remains the same from the previous game, and only received adjustments to make Bucciarati's moves more fitting for a fighting game character, such as allowing him to use zippers to chain combos.

As one of the mass majority of playable characters in the game with the "Stand" Style, Bucciarati can turn Sticky Fingers on/off, changing movesets, as well as having access to the Stand Rush ability returning from the Capcom game, being able to attack in conjunction with his Stand. Bucciarati has 950 HP.

ON GROUND
Bucciarati can summon or recall his Sticky Fingers, changing the way he plays.
Heaven's small coincidence
Passive (requires 1 stock of HH)
If Bucciarati is in a round where he could be Retired, "Heaven's small coincidence" automatically activates upon his defeat if he has at least one stock of the Heart Heat Gauge, granting him a small amount of Resolve Mode health to continue fighting with.
Special Moves (Stand Off)
I've got you!

ON GROUND IN AIR OK
Bucciarati punches the opponent from mid-range by extending his arm with a zipper. This move can be performed in mid-air. (Comboable through Puttsun Cancel).
This isn't my arm.

ON GROUND
Bucciarati summons Sticky Fingers as they both perform a 3-hit one-handed combo in unison. If Heavy is inputted, there is a delay but the opponent is sent flying on the final hit. This move has a complete guard effect and thus will block any attack short of Low attacks, Throws, and HHA/GHA. (Comboable through Puttsun Cancel)
Close, zipper!

ON GROUND
Bucciarati rides a zipper placed on the ground at high speed toward or away from the opponent. This move can be used to create or close distance between them, assisting in evasion through the former.
So I gotta beat you, huh?
(During "Close, zipper!")

ON GROUND
Bucciarati delivers a low sliding kick that sends the opponent flying into the stage wall if hit. This move is a low attack that cannot be blocked if the opponent is not crouching.
I'll finish you from afar!

ON GROUND
Bucciarati places a zipper on the ground and enters it, his subsequent reappearance location depending on the buttons inputted. If Down is held, he'll reappear from the ground through another zipper. If Up is held, he'll drop from the air, regardless of whether the stage has a physical ceiling or not.
Special Moves (Stand On)
ARI ARI ARI ARI

ON GROUND IN AIR OK
Sticky Fingers rapidly punches as it moves forward, the final punch sending the opponent flying. This move can be performed in mid-air and is a Stand Rush skill that Bucciarati can disconnect from to attack the opponent while it is executing. (Comboable through Puttsun Cancel)
Not so bright are you?

ON GROUND IN AIR OK
Both Bucciarati and Sticky Fingers both punch from long-range in unison by extending their arms with zippers, knocking the opponent off their feet. (Comboable through Puttsun Cancel)
Saw it coming miles away!

ON GROUND IN AIR OK
Sticky Fingers creates a zipper on the ground and punches into it. Another zipper immediately opens up under the opponent if they're within range to deliver the punch and knock them into the air. This move is a low attack, and cannot be blocked if the opponent is not crouching. (Comboable through Puttsun Cancel)
Open, zipper!

ON GROUND IN AIR OK
Sticky Fingers sends out a zipper moving towards the opponent, knocking them into the air if they touch it. This move is a low attack, and cannot be blocked if the opponent is not crouching. (Comboable through Puttsun Cancel)
Throw
From interrogation to torture!
2 ATK buttons at close range or

ON GROUND
Bucciarati grabs the opponent, punches them upside the head hard enough for them to bounce off the ground, backhand-punches them in the abdomen to knock them into the air, then backhands them again in the head to send them flying.
Heart Heat Attack / Great Heat Attack
Are you prepared? I am!

+ 2 ATK Buttons ON GROUND
Bucciarati's HHA, "Are you prepared? I am!", involves him bracing himself with his arms before sprinting forward at full speed. If he successfully tackles the opponent, Bucciarati will grab them before falling with them into an open zipper on the ground created by Sticky Fingers, and deal heavy damage to them off-screen with accompanying muffled commotion. Bucciarati finishes by reappearing from above the screen and forcefully pile-driving his victim into the ground as he cleanly rolls away, at the cost of a sliver of health. Bucciarati can regain this lost health over time, but only if he doesn't receive any more damage during this process.
Arrivederci!

ON GROUND
Bucciarati's GHA, "Arrivederci!", involves Sticky Fingers creating a zipper on the ground and punching into it, sending out another zipper moving along the ground towards the opponent. If it touches them, it opens up as the Stand's zipper-extended fist flies out of it, uppercutting them high into the air. Bucciarati and Sticky Fingers then fall into their own open zipper on the ground. Sticky Fingers emerges from the zipper directly under the airborne opponent and assaults them with a barrage of upward punches, letting out its signature "ARI ARI ARI" cry. Bucciarati slowly emerges during the extended assault and bids his opponent an "Arrivederci" while saluting, as a final left haymaker from his Stand sends them flying (recreating how he killed Pesci).

Alongside the rest of the playable members of his gang (sans Narancia), as well as Ermes Costello of Part 6, Bucciarati is one of the only characters who activate Resolve Mode instead of the normal Rumble Mode when low on health. In this state, attacks that do not result in hard knockdowns or blow-backs no longer phase the character.

If he is hit with Giorno's HHA, "Savor the taste of pain!", Gold Experience delivers a potent hook to his jaw, effectively dislocating it as a tooth can be seen flying from his mouth, recreating the exact same scenario in the manga.

Bucciarati was voted as the 4th most fan-favorite character in All-Star Battle's League, making an exhibition match against Part 4 Josuke Higashikata to promote the game. 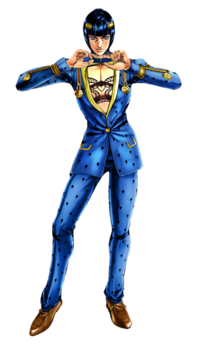 Bucciarati was confirmed for Eyes of Heaven alongside Diavolo and Trish Una, as both a playable character and a guide NPC. As a Stand User, Bucciarati is one of many characters with wildly varied abilities that grant him uniqueness in battle.

Bucciarati is given an alternate costume, based on his appearance as a child. His bangs are parted in the middle, and his hair lacks its usual accessories and top braid. He sports a simpler, more casual zipperless outfit consisting of a long, low cut v-neck shirt and open jacket over it, and wearing plain pants that do not have the spoon-like symbols that are signature to his default appearance.

He is paired with Trish in the Eyes of Heaven Tournament, having been placed in the F Block series of battles to be incorporated into the main Tournament. They defeated Diavolo and Joshu Higashikata in the first round, and Part 4 Jotaro Kujo and Diego Brando (Parallel World) in the second, being successfully introduced into the main branch. In the semifinals, they defeated Giorno and Mista in the first round but were ultimately eliminated by Jolyne Cujoh and Gyro Zeppeli in the second.

Lurking in a Zipper ver.
Rarity: 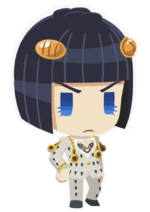 Cost: 0
After using his skill 4 times, enhances all panels in the bottom 2 rows (up to 3 times per battle).

The Path I Believe in ver.
Rarity: 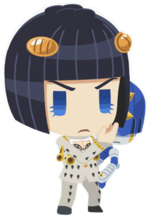 Erases panels and creates Zipper panels. After some seconds, they will become Box panels

Cost: 0
After making a 5x5 or bigger, enhances 9 random Stand Up Panels (up to 3 times per battle). 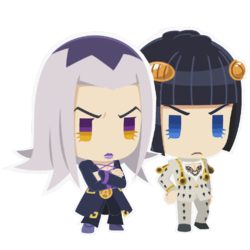 Skill: Replay the recording and track them

Cost: 0
After making a 5x5 or bigger, replaces 4 random panels in Stand Up with intensified panels.

Skill: I've accepted this as my "fate"

Bucciarati was one of the characters first confirmed during the game's announcement. He has two unique zipper-related abilities allowing him to move quickly through walls, or hide in objects for a limited amount of time. 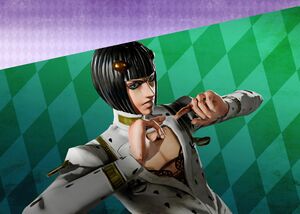