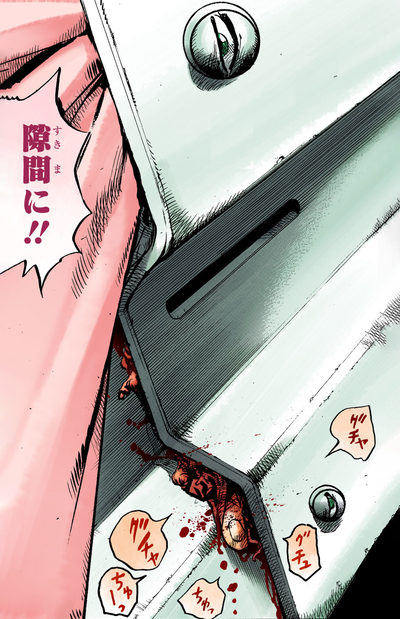 JJL Chapter 110 (Flashback)
“
The guard rail... It's a new type of creature and most likely an animal! Something like a snake... or a guard dog...!
”
—Lucy Steel, JJL Chapter 110: Higashikata Fruit Parlor

Radio Gaga is a long serpentine creature that disguises itself as a guard rail.[1] Its skin is hard, dry and firm, similar to an iron plate.[1][3] It has eyes resembling screws, with a thin slit in between them.

The series is known for alternating colors between media, the information presented below may or may not be canon.
Body(Steel-colored body)
Eyes(Teal)

The creature frequently makes rather unintelligible sounds, such as "ga ga" (ガガ). 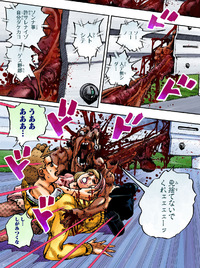 Radio Gaga is capable of luring in potential victims by mimicking its previous victims' voice, by vibrating its own body surface like a speaker.[1] This ability helps Radio Gaga hunt for food, such as birds and other animals. Any human who is lured near the guard rail seems to act strange, such as muttering "ga ga" or taking off their clothes. Once the victim is near it, Radio Gaga then sucks them between the steel plates and crushes and digests them.

Although its origins are unknown, Radio Gaga is heavily implied to be Toru's "guard dog", as it lived near the Twin Pines, where Toru would at some point be spotted planting Locacaca fruits. At some point, the creature was responsible for the disappearance of a woman, having lured and devoured her, though it's implied that it claimed more human lives. The disappearance of the woman was dubbed the "Radio Gaga Incident" (ラヂオ・ガガ事件, Rajio Gaga Jiken), making the spot it inhabited famous.[2]