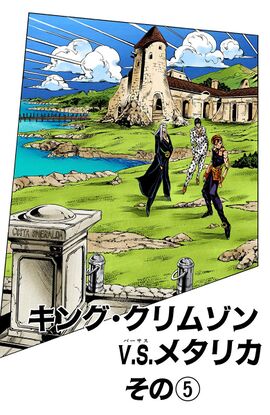 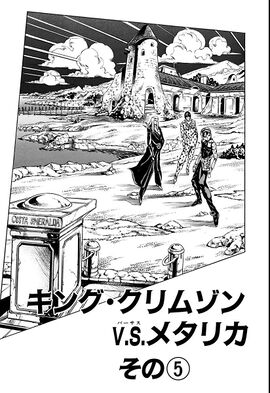 Near the coast, Bucciarati, knowing that the Boss once took a photo here thanks to Trish, tells Abbacchio to rewind events to 15 years ago while he and Narancia investigate the attack.

Meanwhile, the Boss leans over a fatally wounded Risotto and orders him to give him his iron back, in exchange of a painless death. However in one last fit of defiance, Risotto has covered Aerosmith with Metallica, forcing it to shoot the Boss from behind. Time is erased for half a second, causing the bullets to pass through the Boss and hit Risotto instead, killing him.

The Boss then has no choice but to hide as Narancia and Bucciarati approach. Bucciarati identifies Risotto as the leader of La Squadra Esecuzioni, but also sees his severed foot, deducing that Risotto was fighting someone powerful and confident. He decides to search the area while the Boss tries to replenish his iron by eating the frogs near him.