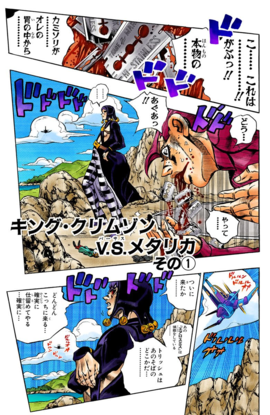 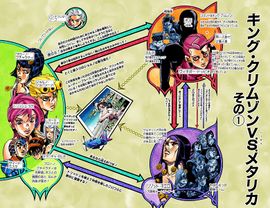 Doppio charges toward Risotto to get in range of his power, but needles appearing in his mouth force Doppio to stop and get them out while Risotto disappears into the landscape. Doppio receives a phone call and desperately asks what to do.

The Boss tells him that he's granted him part of King Crimson's power; one arm and the sub-Stand Epitaph, which enables him to predict the future. Using Epitaph, Doppio foresees Risotto camouflaged among the rocks, but more importantly that a pair of scissors will appear in his throat.

(Cover only) (Photo only)
Donatella Una